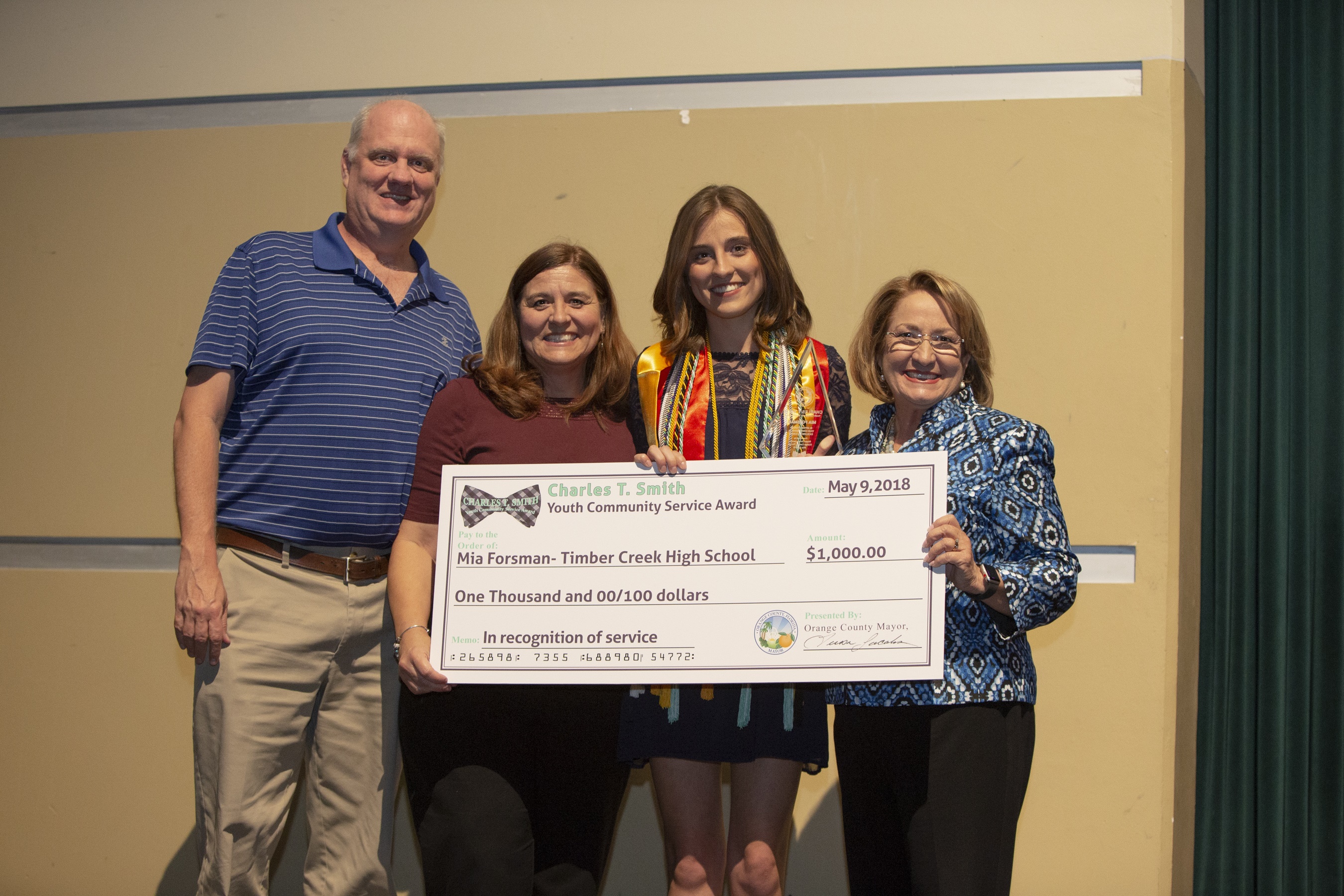 The award, created by Orange County Mayor Teresa Jacobs, recognizes an outstanding high school senior who has shown dedication toward making a positive impact in their community through service and volunteerism. The award honors the life and memory of former Orange County Ombudsman Charles “Chase” Smith, who devoted his life to government, public service and improving his community.

Forsman, a member of the Girl Scouts of Citrus, Troop 565, was recognized for her dedication to community service and public engagement through her involvement with the organization.

“My Girl Scout troop and I made and delivered fabric memory boards to the residents at Delaney Park Nursing Home. It made residents feel appreciated and loved,” Mia Forsman said. “We were able to brighten the lives of 60 residents, and it was obvious to us how much they appreciated our act of kindness and service.”

Mayor Jacobs attended the ceremony to present Forsman with the award.

“I am inspired by Mia’s genuine drive to help those in need. She definitely embodies what it means to be a Girl Scout and it is clear that service is more than just a requirement, it’s a passion,” Mayor Jacobs said about the award recipient. “With so much left to conquer in life, Mia already has had such a profound impact on so many people.”

Chase Smith was a fourth generation Floridian, born and raised in Wauchula, Fla. He had a true passion for public service, which began when he was in high school and led to him running for public office when he was 18 years old.  The first time he ran, he lost, but in 1992, at the age of 20, Smith defeated the odds by becoming the youngest elected official in Hardee County history. Throughout his three terms, Smith worked to better his hometown by serving as a voice for the next generation of citizens, while still being able to understand and relate to the concerns and issues of the entire population.

After 12 years of service as an elected official, Smith came to Central Florida where he quickly learned the intricacies of a large government and served as a key counselor to a City of Orlando elected official. In February 2011, Mayor Jacobs extended an invitation to Smith to join her administration as an aide for constituent relations and outreach, and in August 2011, he was appointed to serve as Orange County’s first Ombudsman. Smith was selected for this role because of his extensive understanding of government and his passion to serve the community.

“Chase was a man of courage, honesty and compassion. He gave freely of his time and talents, especially to those in need, or those deserving of a hand up,” Mayor Jacobs said in her address to the students. “To those looking to make their mark in the world, I urge you to follow Chase’s example. Don’t wait to set and achieve your goals, start now.”