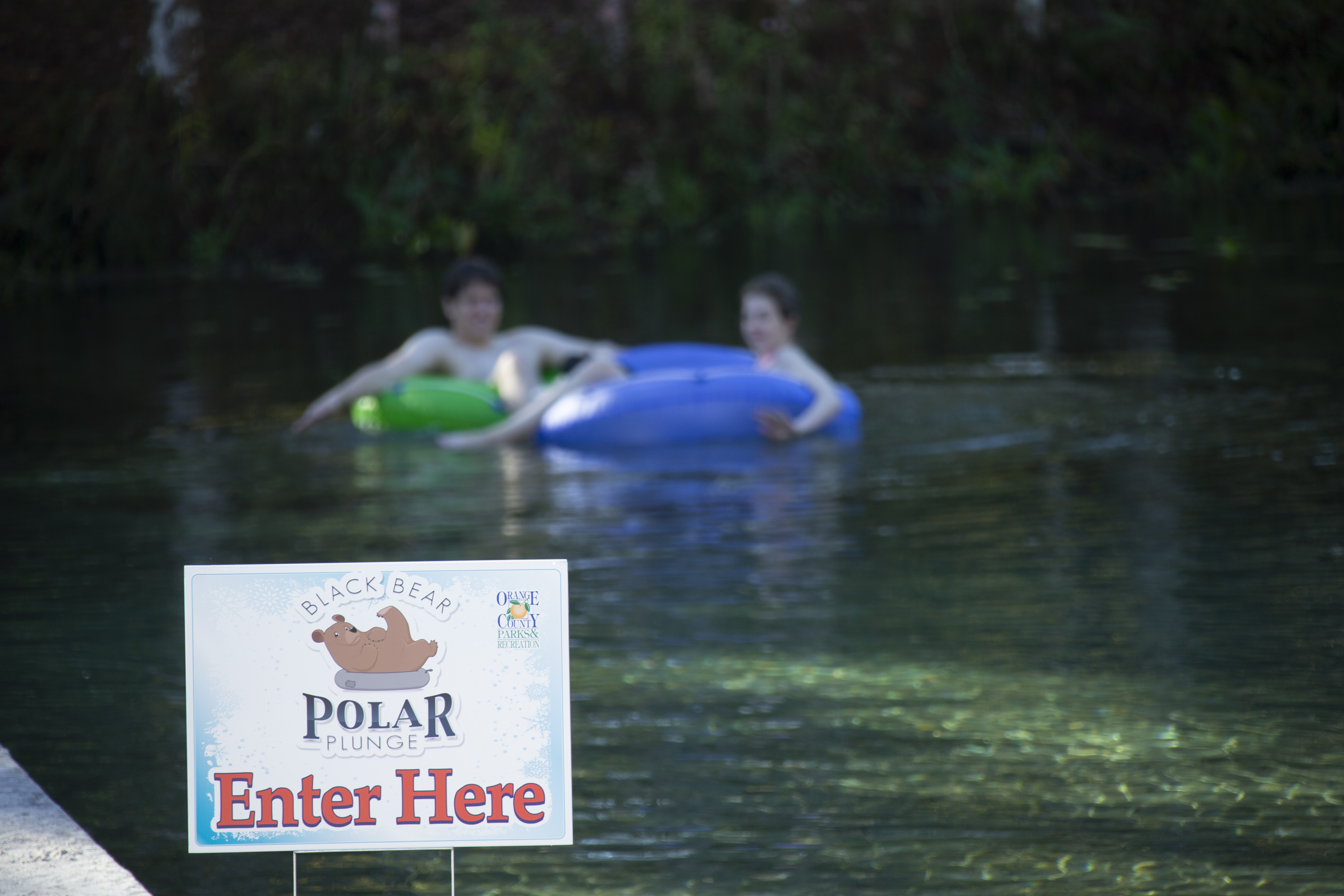 As the song goes: “The orange and palm trees sway … there’s never been such a day, in …,” well, Orange County, F-L-A!

Orange County Parks and Recreation hosted the inaugural Black Bear Polar Plunge on Jan. 1, 2019 in Kelly Park’s Rock Springs in Apopka. While Parks and Recreation staff hoped for a frosty, winter-like day to ring in 2019, guests saw sunny, 82-degree temperatures instead. The Black Bear Polar Plunge was the southern version of a polar bear plunge typically done during the winter months around the world.

Among those who leaped into the 68-degree waters of Rock Springs was 82-year-old Harold Thompson.

“I’ve been swimming here for 70 years,” said the Apopka resident who was the oldest participant. “I swim in the Springs – into the current – three times a week for 500 strokes each visit,” he explained as he showed off his well-defined arm muscles. He was among the first wave of people who jumped in at 10:30 a.m., as his wife, Sandy, stood on shore to watch.

“New Year’s Day is usually one of the least busy days of the year at Kelly Park,” said Parks and Recreation Manager Matt Suedmeyer. “We were happy to see 103 plunge participants, young and old alike, at this new event, as well as their families and hundreds of other guests who came to enjoy the beautiful day outdoors.”

Those who braved the chilly waters received a certificate of participation. Ideal weather conditions, leading up to the event in the previous week, caused visitor attendance at the park in Apopka to spike higher than normal.

Windi Kemplin of Orlando came with her husband Millard and daughters Mindi, 10, and Cindi, 8. When her husband saw the event listed in the Orlando Sentinel newspaper, they thought it would be fun to do as a family.

“I grew up in Florida and enjoy being outdoors like this,” she explained. Next year, as a troop leader, she hopes to bring her Girl Scouts.

Kelly Park’s original 260 acres – to be “held as a preserve” – was given to Orange County on May 12, 1927, by Dr. Howard A. Kelly, one of the four founders of Johns Hopkins University Hospital in Maryland. His foresight has allowed millions of visitors to enjoy the land and Rock Springs, which flows at 26,000 gallons per minute. In 2019, Orange County Parks and Recreation will celebrate 95 years as an integral part of the fabric of millions of families’ memories.