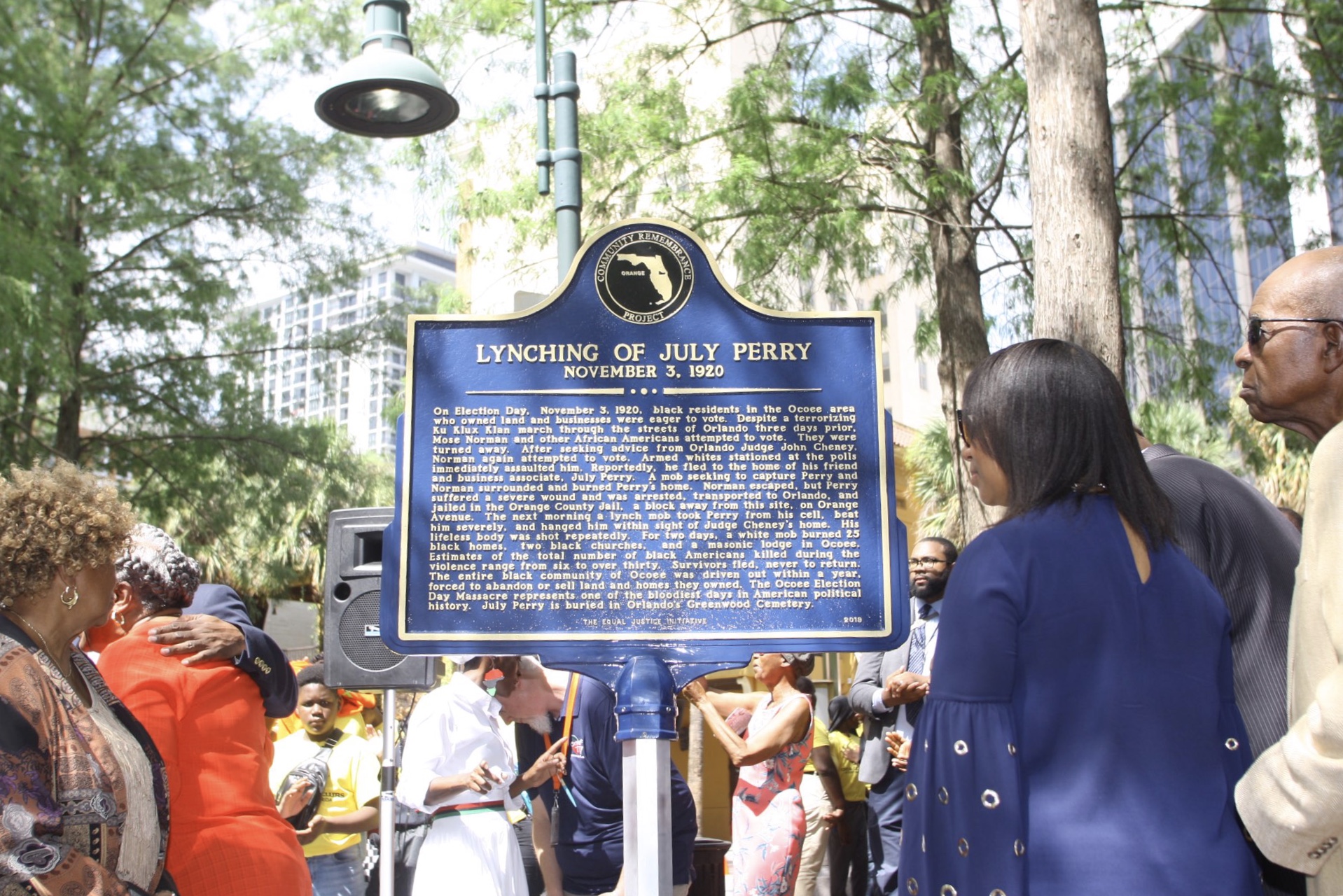 At 10:30 a.m. on June 21, 2019, a historical marker in remembrance of one of the darkest days in Orange County was placed during a ceremony in Heritage Square outside of the Orange County Regional History Center. The marker honored July Perry, who was lynched during the Ocoee Massacre in November 1920.

“This was a historic day for our community as we unveiled the marker of July Perry,” said Orange County Mayor Jerry L. Demings during his remarks. “It is because of Mr. Perry’s sacrifice and other African-Americans before me, that I’m able to stand here today as the first African-American Mayor of Orange County.”

The Ocoee Massacre remains the largest incident of voting day violence in United States’ history. Mose Norman, a black Ocoee citizen, attempted to exercise his legal right to vote and was turned away from the polls. That evening, a mob of armed White men came to the home of July Perry in an effort to locate Norman. The crowd turned violent and shots were fired.

July Perry was jailed, and eventually lynched. A currently unknown number of African-American citizens were murdered, their homes and community burned to the ground, causing the entire black population of Ocoee to flee, never to return.

After the unveiling, the event continued at the Orlando Public Library with a ceremony and remarks by Bryan Stevenson, the executive director of Equal Justice Initiative (EJI) of Montgomery, Alabama.

This marker is a major milestone in a series of events happening throughout Central Florida to create greater awareness and understanding surrounding racial terror, and to further the necessary conversation which will advance truth and reconciliation locally.

These conversations, along with in-depth research, will culminate in a fall 2020 landmark exhibition by the Orange County Regional History Center marking the 100th year remembrance of the Ocoee Massacre.

The exhibit will explore not only this horrific time in our community’s history, but will look towards more recent incidents of racism, hatred, and terror, some right here at home. The content will encourage reflection on a century of social transformation and ask what lessons history can share for moving forward.

EJI’s Community Remembrance Project recognizes victims of lynching in the United States during the time between Reconstruction in 1877 and 1950 by collecting soil from lynching sites and erecting historical markers such as this one. The marker was placed in partnership with the Truth and Justice Project of Orange County, Bridge the Gap Coalition, the City of Orlando, Orange County Government, Orange County Public Library System, and the Orange County Regional History Center.

The History Center is located in the heart of downtown Orlando, and offers an array of exhibits. To Plan Your Visit, see details on their informational page including hours and admission, directions and parking.