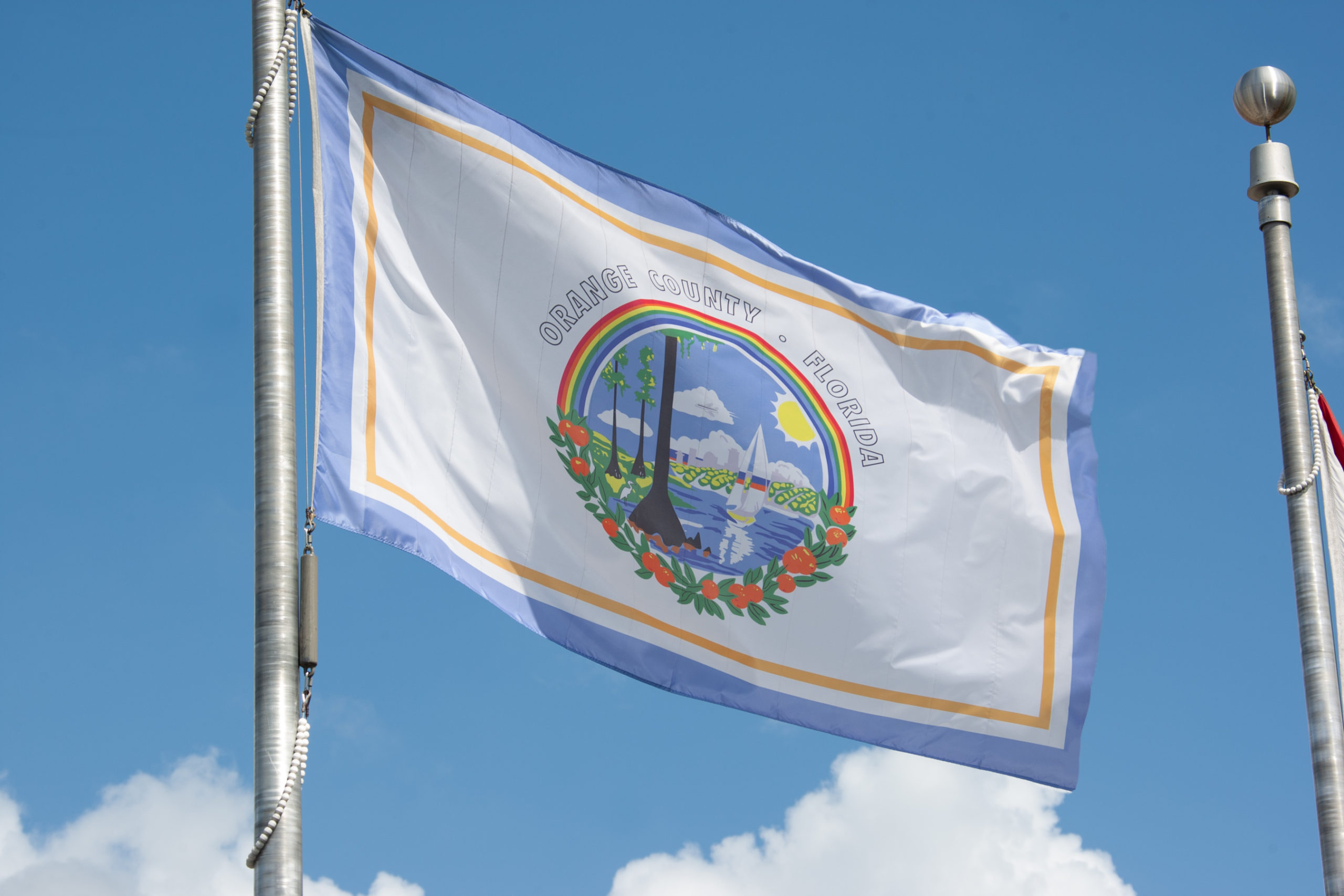 A Story Worth Flagging: The Origination of Orange County’s Official Flag

As we celebrate Flag Day on June 14, 2020, you may wonder how Orange County came up with its official flag. That story, as it turns out, is one that should be “flagged” as an interesting read for all residents.

When Orange County personnel moved into the new Administration Building in 1984, they noticed three flagpoles outside the building — one each for the federal, state and county flags. The problem was there was no county flag. Orange County had never gotten around to creating one. The third flagpole was flagless.

In order to remedy this, former Commissioner Vera Carter called for a contest to design the official County flag, with a $500 prize going to the winner. The only requirement for the entries was that all flag designs contain something that symbolized Orange County.

Margaret Brackney, Service and Information Coordinator for the County at the time, noted, “We’re in the land of citrus; we have a lot of water and blue skies. We want all the lovely aspects of Central Florida the way each individual perceives it.”

More than 300 entries were submitted by area residents. Bob Morris, former columnist for the Orlando Sentinel, was one of five judges tasked with choosing the final three flags, which he described as “marvels of vexillography,” or the art of flag design.

Apparently his favorite flag was one that showed an alligator on a rampage with an orange in its mouth. It did not make it to the finals. In his column, Morris admitted the design was cliché, but he still liked it. He wrote: “It looked like a dangerous game of fetch.”

Only three of the entries did not include an orange, but perhaps the “cutest” entry came from a child at Bonneville Elementary School in Orange County, which had an orange wearing a mustache and glasses like a Mr. Potato Head. Can we all, just for a moment, imagine this unique flag waving on the flagpole at the Administration Building today? Well … maybe not, but you have to give the kid credit for style.

The winner of the flag contest was Richard Adams of Orlando, who worked on audio animatronics at Walt Disney World. The elements of his design included a lake, sail boat, orange grove, cypress trees, the city of Orlando skyline and blue sky (replete with the sun, a few puffy clouds and an airplane). This peaceful scene was bordered by a rainbow on the top half and oranges on the bottom half.

In a ceremony on June 15, 1985, Commissioner Carter named the winner and unveiled the official County flag. In her speech that day, she said the winning design “symbolizes so many of the things Orange County is famous for.”

Adams, who happily accepted the $500 prize, stated, “I wanted to come up with a design that the people could be proud of.”

He most certainly did, and that is how the problem of the third flagpole was flagless no more … and how Orange County got its unique emblem.