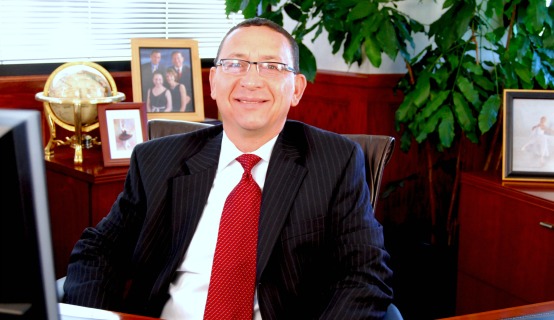 Orange County Chief Information Officer Rafael Mena was recently honored by the Dominican Republic Ministry of the Presidency for his assistance in implementing the country’s new emergency 911 system.

In a letter sent to Orange County Mayor Teresa Jacobs, the Ministry thanked her for the “invaluable assistance provided by Mr. Mena.”

Mena, whose father was born in the Dominican Republic, was in the country on vacation visiting relatives when he was contacted by the Ministry of the Presidency.

“Some of my relatives work for the Presidency so they knew I was there,” Mena said. “I was invited to meet with them because they knew my credentials. They asked me if I could oversee and review the project to make sure everything was OK.”

In December 2013, The United States Embassy in the Dominican Republic donated $6 million in equipment to the country for the creation of an integrated 911 emergency and safe system, which included 200 surveillance cameras, a call operator unit, portable LED screens, a database system and transmission equipment. The donation was part of an agreement signed in April 2013 to implement the Caribbean Security Initiative and the war on drug trafficking.

As chief information officer, Mena leads a talented team of information technology professionals who maintain Orange County Government’s technology needs from the region’s 911 and Fire and Rescue call system to the security systems at Corrections and the 311 non-emergency community service.

Having spent more than 25 years in various roles throughout Orange County government and now overseeing a nationally recognized IT organization, Mena’s in-depth understanding of governmental operations and technology proved an vital resource to the team charged with implementing the new system in the Dominican Republic.

“To be good at my job, I need to understand how every part of the business works,” Mena said. “Everything we do has a technology component and because of that I have the opportunity to work with everybody.”

Mena provided guidance on the new 911 system during his initial trip but has since taken additional personal time to do pro bono work on the multi-phase initiative. Orange County Network Services Supervisor Peter Miller and Telecom Unit Supervisor Rich Steiner donated their time and joined Mena on his most recent trip to examine the country’s 911 security and communications architecture and systems.

“One of the things I recommended was to consider what the population is going to do once the system is launched,” Mena said. “If the entire population is going to call to see if it works. No matter how good the system is, if you have hundreds of thousands of people all calling at once it’s going to fail. So I recommended they implement it in phases. Have a soft opening. Turn it on and run some scenarios to see what happens.”

But for all the impact Mena has had on the Dominican Republic, the work and the people has perhaps had the greatest impact on him.

“It’s a whole different culture and government structure and I’m helping make decisions for a country, not just one of the biggest counties in Florida,” Mena said. “It’s a great and humbling responsibility.”

Mena went on to explain that government’s main responsibility is to protect and serve citizens.

“What better system exists that embodies that responsibility than 911? It is the definition of what government is supposed to do while directly and indirectly improving all other public services and how they work together,” he said “You get to see its impact in real time. That’s why I’m so connected to this project.”

In 2012, Mena’s team launched Orange County’s new, redesigned official website and took first place at the Center for Digital Government’s nationwide Best of the Web Awards. Mena was also acknowledged by the Hispanic IT Executive Council as one of the nation’s most influential and notable Hispanic professionals in the IT Industry in November 2013. Mena is also an honoree on the Orange County Employee Wall of Fame for his recent recognition as Vision Magazine’s 25 Most Influential Hispanics in Central Florida of 2014.

Mena began his career with Orange County in 1989 and has a bachelor in Computer Science from the University of Kansas. He serves on various multi-agency executive and management committees and is regularly cited in national IT trade magazines.