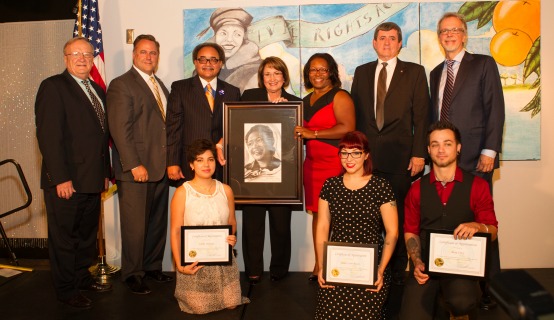 Orange County Mayor Teresa Jacobs and the Orange County Regional History Center recently hosted a ceremony to commemorate the 50th Anniversary of the Civil Rights Act of 1964. The observance served as a public remembrance of the milestone legislation that greatly expanded civil rights protections, outlawed racial segregation in public places and encouraged desegregation in public schools.

“It is so important that we remember the struggles that led to the passage of that historic legislation,” Mayor Jacobs said. “We must keep the story alive for future generations and each of us must be vigilant in standing up and speaking out on behalf of what is right.”

The program included the personal testimonies of several Freedom Fighters including Kran Riley, Orange County NAACP president, who took part in the “March on Washington,” and Curtis Dean, Rosa Park’s Godson, who presented Jacobs with a portrait of Rosa Parks that will be featured at the history center. Dean, who has resided in Orange County since 2000, said he’s proud of how far the County has come since the time of the Civil Rights movement.

“With Orange County the number one tourist destination in the country, the city I live in has opened its gates to the people of the world,” Dean said. “You can’t achieve that kind of success without diversity being the cornerstone of our community. I’m proud of Orange County displaying the virtues embodied by my Godmother.”

“In spite of our students’ busy schedules, they still wanted to get involved in the community and beyond,” said Holly Tharp, Fine Arts department chair for 3D Art and faculty advisor for the project. “After Orange County and the History Center approached us about the creation of a mural, we gave the students a general brief of the project and let them play for an hour. Then the game began. They had eight to ten 10 hours in one day to complete the project.”

The mural features Dr. Martin Luther King, Jr. and Zora Neale Hurston, a writer, folklorist, and anthropologist from Eatonville. Their contributions to racial equality have helped spawn a thriving and diverse community in the heart of Central Florida. A time-lapse video of the mural’s creation can may be viewed at: http://youtu.be/5-Il6o6GhQQ.

“Having the talents of our students on display at the Orange County Regional History Center to commemorate this vital moment in history is an absolute honor,” Full Sail University President, Garry Jones said. “Our hope is that this student created art piece will serve to inspire and instill the ever-present possibility of positive change.”

In June, Mayor Jacobs joined Florida State District 12 Senator Geraldine F. Thompson and Commissioner Tiffany Moore Russell for a celebration to commemorate Juneteenth at the Wells’ Built Museum of African American History and Culture. Juneteenth is the oldest known celebration commemorating the end of slavery in the United States dating back to June 19, 1865. It was on that day that the Union soldiers landed at Galveston, Texas, with news that the war had ended and that the enslaved were now free.

A collection of photos from the Juneteenth event and the 50th Anniversary of the Civil Rights Act ceremony are available for use by the media and are located on Flickr.