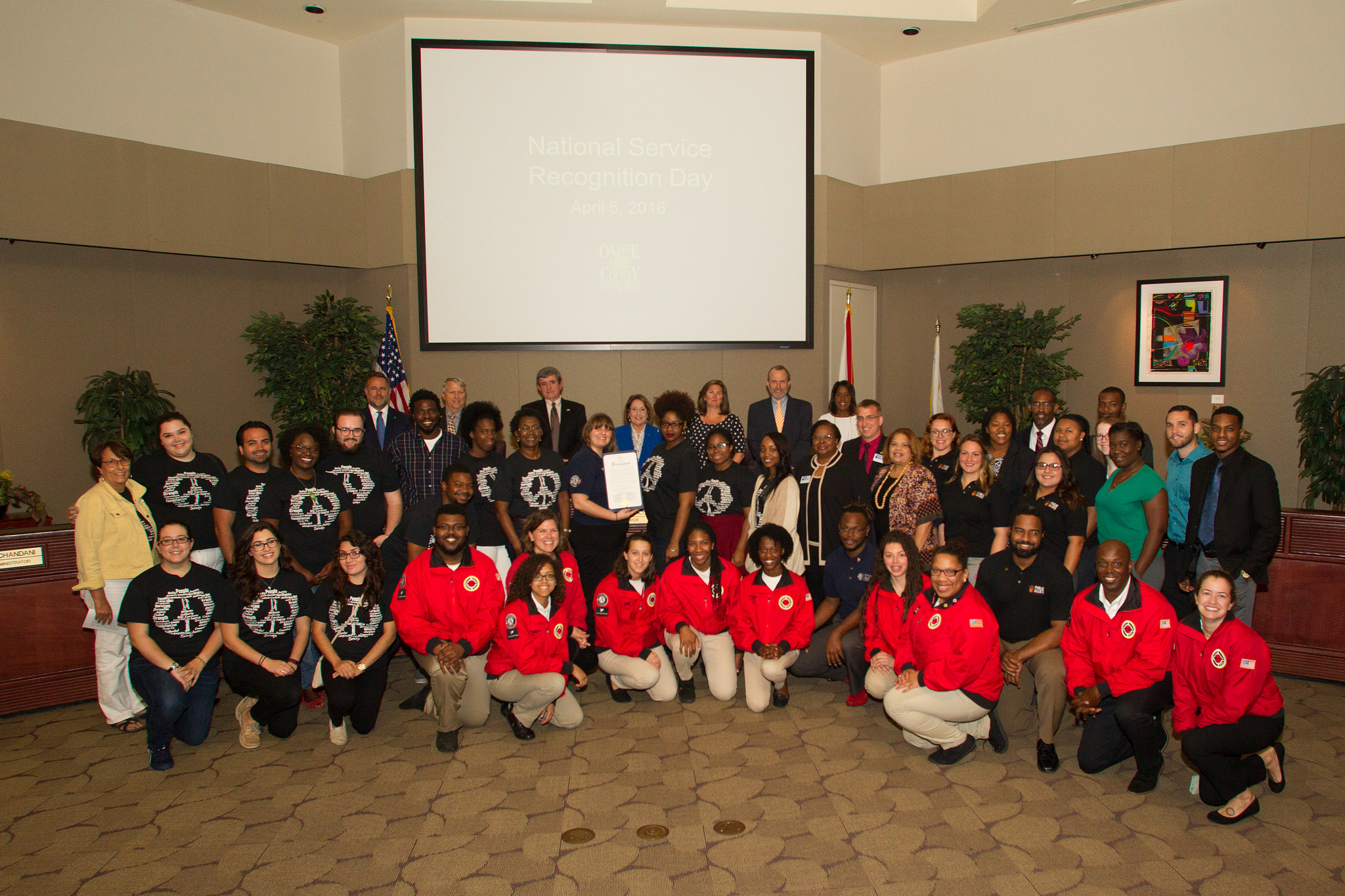 “We have amazing AmeriCorps alumni who work at Orange County and continue to make our region the best place in the world to live, learn, work and raise a family,” Mayor Jacobs said. “We thank our AmeriCorps alumni for all of their wonderful contributions, their selfless service to our community and their commitment to making Central Florida stronger.”

In 1993, President Bill Clinton signed legislation creating AmeriCorps to connect Americans of all ages and backgrounds with opportunities to give back to their communities. The Florida Legislature created Volunteer Florida in 1994 to administer AmeriCorps in Florida with the first class of AmeriCorps members serving the state that year.

Mayor Jacobs’ Chief of Staff Graciela Noriega Jacoby previously served two years with AmeriCorps. During her first year of service in 1997, Jacoby worked with Orange County’s Parks and Recreation Division in the Bithlo community, while pursuing her undergraduate degree at the University of Central Florida (UCF). During her first year of service with AmeriCorps, she worked as a tutor and mentor, led recreational programs, and worked with residents on neighborhood improvement projects. During her time in the Bithlo community, Jacoby offered a foreign pen pal and cultural education program to students that earned her an All*AmeriCorps Award, presented to her by President Bill Clinton and the late Coretta Scott King.

In 1999, she became an AmeriCorps National Civilian Community Corps Team Leader serving in the northeast, including West Virginia, Pennsylvania, Virginia, Ohio, and the District of Columbia focusing on the areas of unmet human needs, public safety, environment, education and disaster relief.

“The experiences I had with AmeriCorps had a tremendous impact on the life path I have chosen,” said Jacoby, who later obtained a master’s degree in public administration from UCF. “Investing in our community through volunteerism has a positive impact on our neighborhoods and residents.”

Jacoby briefly worked in the private sector and in 2000, a senior aide position with newly elected District 1 Commissioner Teresa Jacobs brought Jacoby back to public service at Orange County.

“Graciela served as my senior aide during my two terms as District 1 Commissioner, and as Chief of Staff remains my ‘right-hand’ person,” Mayor Jacobs said. “She continues to play a vital role in Orange County and is fully committed to Orange County’s ‘neighbors helping neighbors’ philosophy.”

As one of AmeriCorps’ 26 programs in Florida, City Year Orlando’s mission is to help at risk children in low income areas reach their full potential. Jacoby also serves as a member on the City Year Orlando board of directors.

City Year service members work closely with the Orange County Public School system to tutor, mentor and guide students towards a successful future. According to City Year, 70 percent of students in grades 3-9 improved one letter grade in English with the tutoring help of their service members.

“Not only did my service help to transform communities, my service had a transformative impact on me, just as it does with our members serving all over the nation,” said Jordan C. Plante, vice president and executive director of City Year Orlando. “September marked the 20th Anniversary of AmeriCorps and Volunteer Florida, and I could not be more proud to be an alumna, a champion and an advocate for National Service.”

“AmeriCorps is an integral human capital solution to solving some of the nation’s most pressing issues,” Plante said. “I am honored to partner with our community to lead AmeriCorps members in service to students in seven Orange County Public Schools.”

During a celebration held in Miami on September 12, President Barack Obama made a special appearance via satellite from the White House and assisted in the swearing-in of approximately 1,000 new Florida AmeriCorps service members at the Miami Beach Convention Center.