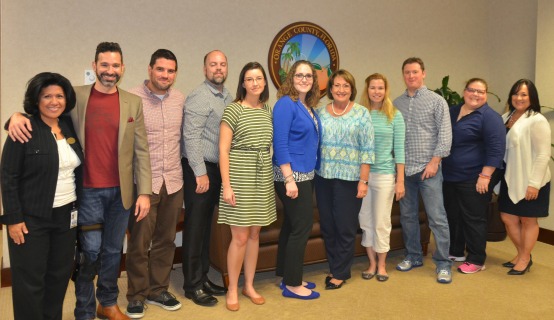 The Communications Division at Orange County Government is the recipient of Ragan PR Daily’s Digital Award for Best Community Engagement, recognizing the groundbreaking success of online outreach efforts with citizens during Mayor Teresa Jacobs’ 2014 State of the County address held in June at the Ballroom at Church Street.

Ten Social Media Ambassadors – who have large followings on social media networks such as Twitter, Facebook and Instagram – were invited to assist in increasing public engagement and awareness of Orange County’s signature event the State of the County, presented annually by Mayor Jacobs.

The goal of the campaign was to increase citizen engagement and facilitate a dialogue with a broader demographic by utilizing online influencers from the region’s burgeoning social media, blogging and technology sectors.

“I am so proud of our team and Social Media Ambassadors for engaging the community in such an innovative and award-winning initiative that reached thousands of citizens in Orange County,” Mayor Jacobs said. “Connecting with and encouraging our citizens to become more involved in their government continues to be a top priority for my administration.”

In the days leading up to the State of the County, the Ambassadors received messaging and digital images to support a grassroots hashtag campaign using #YearofTransformation, #SOC2014, and #OCTransformation. Google Glass was used to record and share live from the Ballroom, making the event the first State of the County address in Florida to feature the technology.

The Social Media Ambassadors initiative proved to be one of the most successful digital outreach initiatives in Orange County’s history.

“With today’s interactive communication landscape, every organization must recognize the importance of maintaining a dialogue with constituents,” said Ann Marie Varga, Communications Division Manager. “We are doing that right here in Orange County, from our new online Newsroom to our social media outreach, and pioneering mobile applications.”

Winners were selected by a panel of judges and were determined by how the campaign engaged online community leaders and opinion makers transforming them into advocates for the brand.

“Orange County Government wins top honors … for its ingenious use of local online talent to help reach and engage hundreds of thousands of county residents,” PR Daily stated in its official announcement made on Thursday morning.

The Social Media Ambassadors will continue their role as innovators and collaborators in the County’s new Technology and Social Media Workgroup, which will operate as a think-tank to advance new technologies, social media and mobile applications supported and developed by Orange County Government. The workgroup will also collaborate on how to best enhance online public engagement and support the growing technology and digital community in our region.

“Rarely do you see this type of engagement of local community experts to enhance a municipality’s message,” said Carlos Carbonell, Social Media Ambassador and CEO of Echo Interaction Group. “The enlightened thinking from Orange County Government’s Communication Team shows that local government can not only enlist some of the community’s top social media influencers properly but also expand the reach of important messages without incurring additional tax payer costs. This was quite simply the smartest way of utilizing resources creatively.”

“Mayor Teresa Jacobs has shown incredible vision to take the conversation to where the masses are already communicating,” Auer said. “Her willingness to adapt to technology, utilize it in an effective manner, and then reach out in a meaningful way is impressive. I am honored to have played a part in helping unite the community in an on-going conversation about Orange County.”