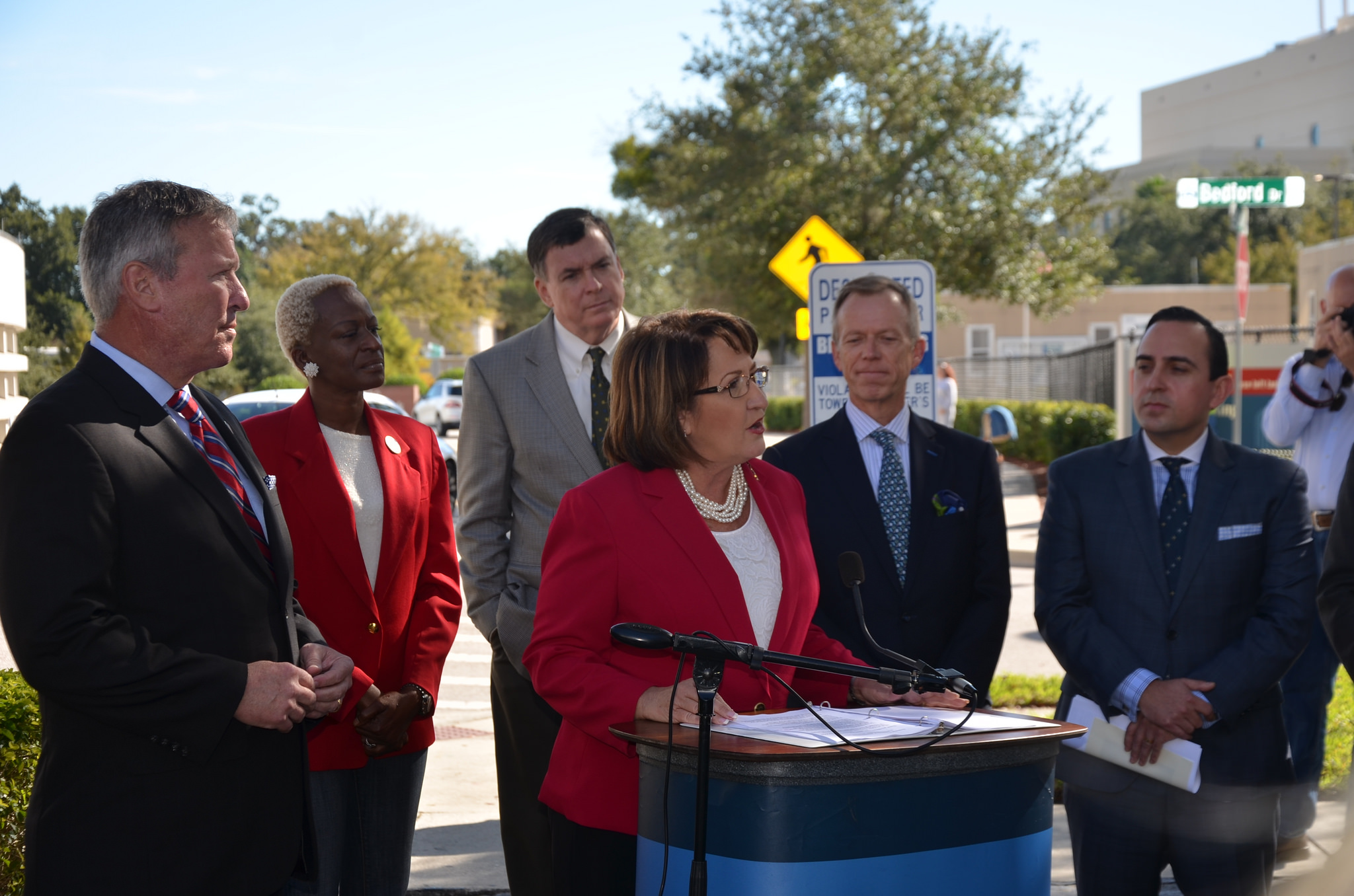 Orange County Mayor Teresa Jacobs joined Florida Hospital at its recent announcement of the largest, one-time private donation to end chronic homelessness in Central Florida history — a momentous commitment that will change the way this unique population is cared for and supported in years to come.

Lars Houmann, CEO and President of Florida Hospital, announced that Florida Hospital would generously commit $6 million over three years to address homelessness in the region.

“As individuals, we sometimes look away when we see a homeless person because the sight is painful,” Houmann said. “We can no longer do that. Businesses, hospitals and the community must unite around this issue. We all have a moral obligation to take a stand to end chronic homelessness.”

At the event, Mayor Jacobs also announced that she will lead an in-depth discussion regarding Orange County’s plan to impact homelessness as part of a scheduled Board of County Commissioners work session on Dec. 16. Orange County Government currently budgets $13.5 million towards homelessness, however, as announced at the press conference, Mayor Jacobs intends to work with the Board of County Commissioners to boost the funding to $15 million over the next three years for homeless housing, prevention and related family programs.

“For the chronically homeless, and for our families and precious children who are struggling with homelessness, we are committed to creating a better future,” Mayor Jacobs said. “Building upon the great momentum and renewed awareness regarding the issue of homelessness, I believe that we can make history by transforming the lives of our homeless children and families, the chronically homeless, and our proud veterans.”

In addition to a proposed expansion of funding, Mayor Jacobs announced several key next steps. Working with the Central Florida Regional Commission for Homelessness, Mayor Jacobs has asked Dick Batchelor to lead a new committee focused on children and families who are homeless. Founder and President of Dick Batchelor Management Group Inc. and a longtime Central Florida resident, Batchelor is known internationally for his commitment to human rights, and renowned here at home for his tireless advocacy on behalf of children, families, domestic violence victims, our schools and more.

“Together, we will look for the best ways to lift families and children out of homelessness and onto the path of hope, self-sufficiency and success,” Mayor Jacobs said. “Working together, we can help create permanent solutions for housing the chronically homeless in a compassionate, effective and cost-efficient manner.”

As the largest government funder of permanent supportive housing, homeless prevention, emergency family care, mental health and related services in the region, Orange County Government seeks to serve our veterans, our chronically homeless adults, and vulnerable families and children in a variety of ways.

During his annual State of the City address, Orlando Mayor Buddy Dyer announced a bold goal of housing 300 of Downtown Orlando’s chronically homeless individuals in three years. The City of Orlando has committed $4 million over three years to support the “Housing First” model, a proven approach that provides housing with wrap-around supportive services to the chronic homeless.

These financial commitments are the kick-off investment of the “Impact Homeless Fund,” a new collaborative fund at the Central Florida Foundation. This fund will serve as a new public and private investment-solutions vehicle to help those facing homelessness in Orange, Osceola, and Seminole Counties.

In October, the Central Florida Commission on Homelessness, led by CEO Andrae Bailey, traveled to Houston on a learning and sharing experience to engage in an ongoing dialogue regarding the region’s development of an integrated system to address homelessness.

“These new resources will be the catalyst for solutions to homelessness across the region,” Bailey said. “The collaborative fund will have a focus on chronically homeless individuals and families who are homeless in the Central Florida region.”

Read the full story on the trip to Houston.

A collection of photos from the press conference can be found on Flickr for use by the media.