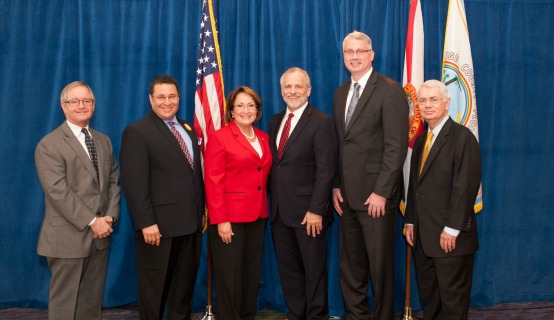 Economists and distinguished panelists who spoke at Mayor Teresa Jacobs’ 2015 Orange County Economic Summit on Thursday are optimistic that the region’s economic ascent will continue in 2015.

The Summit, now in its third year, was held at the Orange County Convention Center and attended by more than 600 citizens.

Buoyed by rising property values, exceptional job growth and the region’s world class hospitality and tourism sector, Orange County’s unemployment has dropped from 11.3 percent in November 2010 to the current 5.2 percent.

“When I was first elected Mayor in 2010, our region was grappling with serious economic concerns, from challenges associated with the financial meltdown and global recession, to fears about balancing our Orange County budget without cutting crucial services,” Mayor Jacobs said during her remarks to the capacity crowd. “Thanks to an incredible amount of hard work from our workforce, education, and public and private-sector partners, we’ve rebuilt. Not just figuratively, but literally. From our brand new Dr. Phillips Center for the Performing Arts, to SunRail, the newly reopened Citrus Bowl, and our new, under-construction MLS soccer stadium, we are the envy of the world.”

“It may not be morning in America as the U.S. economic recovery remains in a pre-dawn twilight, but the sun is shining on Florida’s economy and it is shining even more brightly on Orange County,” Snaith said.

In a Q & A following their speeches, Bacchus and Mencia discussed Central Florida’s efforts to enhance and increase international trade. Last year, the Central Florida International Trade Office (CFITO) opened at the NEC to streamline the process for foreign investors to connect with local partners. CFITO is located in the National Entrepreneur Center at Orlando Fashion Square Mall.

“The world’s economy is increasingly connected,” Bacchus said. “We need to add value to these connections and seize the opportunity to help our prosperity and promote economic diversity in Central Florida.”

“With this launch we are telling our story of economic opportunity and diversity to the world,” Mayor Jacobs said.

A collection of photos from the Economic Summit are available for use by the media and are located on Flickr.