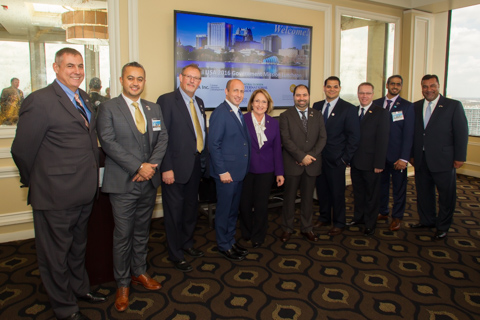 The mission included representatives from the Dubai Investment Development Agency; Dubai South; Tecom Group; Emirates; the U.S.-U.A.E. Business Council; the U.A.E. Embassy to the U.S. and the U.S. Commercial Service for a Dubai-USA Government Mission. The goal of the Mission is to expand relationships with business leaders in Orange County and to advance economic development, trade opportunities and investment between Dubai and Central Florida.

“Our community is incredibly excited to strengthen business and partnerships between Orange County and the United Arab Emirates,” Mayor Jacobs said as she welcomed the delegation. “Already our region is poised for tremendous success. With the introduction of Emirates in Central Florida, including nonstop flights to Dubai that connect to an additional 140 global destinations, our international horizons are limitless.”

“This visit is important because Dubai has emerged as a global city and business hub of the Persian Gulf region. It is also recognized as a major transport hub for passengers and cargo, and was rated as one of the best places to live in the Middle East,” Mayor Jacobs added. “We are honored to be hosting the Dubai Government Mission and to further demonstrate our joint interest in developing mutually beneficial partnerships in key sectors such as life sciences, education, logistics, financial, food, retail, energy, and defense and security sectors.”

Orange County is the first stop on the delegations’ mission trip. During their time in Central Florida they visited with the University of Central Florida, Central Florida Research Park, Medical City and other area businesses. The Central Florida International Trade Office also hosted an event for the delegation, “Doing Business with Dubai” that was open to all community business owners and leaders. More than 100 people attended the event at the National Entrepreneur Center. The group also plans to meet with government and economic development officials in Denver, Dallas and other major U.S. markets.

“Tremendous growth and opportunity from two world-class cities were showcased during the delegations’ visit. Based on the attendance at the various events that were hosted during their stay and the discussions that were held, Central Florida is excited about furthering business with Dubai,” said Elizabeth Krekel, Program Specialist of International Business Development for the Central Florida International Trade Office.”

According to the Embassy of the United Arab Emirates, as of 2014 the U.A.E. is ranked eighth among Florida’s export markets which support over 17,500 Florida jobs.

Photos from the luncheon may be found on Flickr for use by the media.