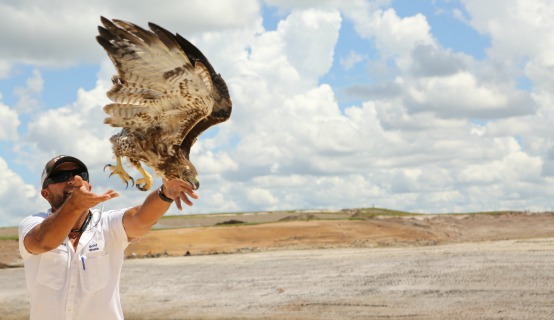 High-Flying Hawk Returns to the Skies Thanks to Orange County

A heartbreaking scene unfolded in early May this year when Howard Shearer, an operations specialist at the Orange County Landfill, noticed a young red-tailed hawk injured on the side of the road after the landfill had closed.

The once majestic bird appeared stunned, so Shearer was able to get it safely into the carrier and kept the hawk in the landfill operations building overnight.

Brian Clark, an environmental specialist for the Solid Waste Division, transported the hawk to the not-for-profit Audubon Center for Birds of Prey in nearby Maitland the next morning. The center focuses on the rescue, medical treatment, rehabilitation and release of Florida’s raptors.

There, the hawk was examined and an X-ray helped determine that one wing was fractured. A wound on his body was also discovered and treated. While there was no way to definitively identify the cause, based on the injuries, the specialists at the center deduced the hawk had likely been hit by a truck.

The fractured wing was immobilized and the hawk was kept in a small enclosure to allow the wound and wing to heal.

Once it was determined the hawk’s wing had healed, the next task was to condition the bird so he would be strong enough to fly and survive once released. This was accomplished by increasing the size of the enclosures to allow more room for him to build strength and stamina. Eventually, he was placed into a 50-foot flight cage where his flight was closely monitored.

Due to the stress of the injuries and length of recovery, he also lost most of his flight feathers, which had to regrow in order to for him to fly correctly.

Finally, in late July, he was cleared for takeoff and ready for release.

The rehabilitated hawk was taken back to the landfill and reunited with Shearer, who had the honor of releasing him back into flight. While it took the hawk a moment to get his bearings, he quickly recovered and mightily spread his wings for a takeoff to the north.

“It was very gratifying to see such different groups work together to rescue, treat and release such a marvelous bird,” Shearer said.