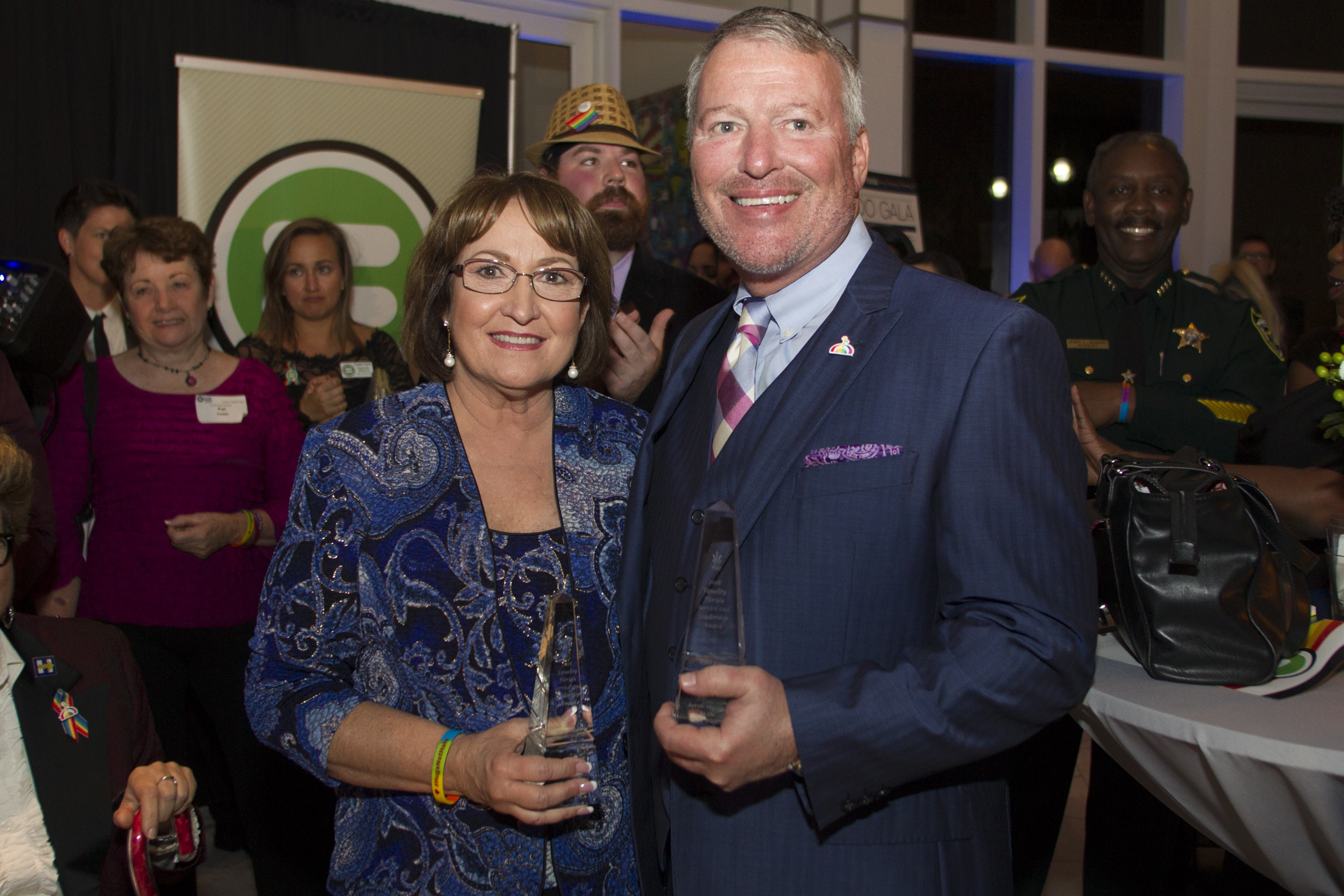 Equality Florida Greater Orlando and the Central Florida community paid tribute to those whose compassion, courage and leadership united the region in the aftermath of the tragic Pulse Orlando nightclub shooting on June 12, when a gunman killed 49 people and injured 68 others.

Orange County Mayor Teresa Jacobs and Orlando Mayor Buddy Dyer were recognized with the Service and Leadership Award at the 9th Annual Equality Florida Greater Orlando Gala held on Nov. 4 at the Orlando Museum of Art. The theme of the gala was Honor Them with Action.

Mayor Jacobs and Mayor Dyer accepted the Service and Leadership Award on behalf of the greater Orlando community. Equality Florida emphasized the importance of unifying the community in strength, inclusiveness and love after the Pulse tragedy.

“Our community’s response to the Pulse tragedy was the greatest example of compassion and unity that I have ever witnessed,” Mayor Jacobs said. “The outpouring of love and support toward the LGBTQ community locally and from all over the world was simply incredible. Our citizens and first responders served as beacons of light to the world, showcasing what truly makes Orlando the City Beautiful.”

From an elementary school student who planned a bake sale to benefit victims, to the medical and mental health professionals who rushed to the scene and continue to help in the healing process, to the small business owners across the city who donated food and other goods, to the elected leaders who stood united in their response, the Central Florida community truly came together to help the Pulse victims, their families, friends and the community respond and heal.

Actor Wilson Cruz, known for his role as Rickie Vasquez on My So-Called Life and Angel in the Broadway production of Rent, was the gala emcee. A relative of Cruz’s was among one of the 49 victims of the Pulse tragedy. In tribute to his loved one and all who were affected by the tragedy, Cruz joined dozens of other Broadway performers to participate in “From Broadway With Love: A Benefit Concert For Orlando,” which took place on July 25 at the Dr. Phillips Center for the Performing Arts.

Equality Florida’s CEO, Nadine Smith, also delivered the organization’s State of the State address, which reflected upon the past year and outlined future goals of the organization.

“We made two promises in the aftermath of Pulse,” said Smith. “The first was to do everything we could to take care of the survivors and the families left behind by this heinous act of hate. We fulfilled that promise by raising more than $9.5 million for those affected by the tragedy. The second promise was to ensure that the lasting memorial to this tragedy is the real change of uprooting anti-LGBT hatred, discrimination and violence in our culture.”

All proceeds from the Greater Orlando Gala will be used to further that goal.

Equality Florida is the largest civil rights organization dedicated to securing full equality for Florida’s lesbian, gay, bisexual and transgender community. Through education, grassroots organizing, coalition building and lobbying, Equality Florida works to ensure that no one suffers harassment or discrimination on the basis of their sexual orientation or gender identity.