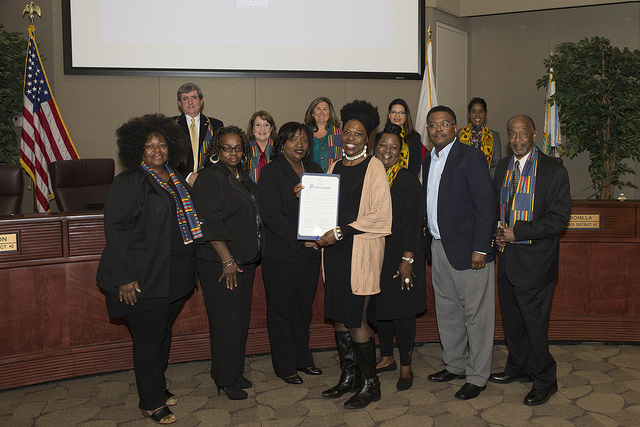 In January, Orange County participated in the City of Orlando 2017 MLK Holiday Parade in downtown Orlando. The annual event brings the community together to remember the courage, triumphs and teachings of Dr. King.

Orange County Mayor Teresa Jacobs also welcomed former U.S. Ambassador to the United Nations Andrew Young to Orange County in January for a fascinating conversation on diplomacy and international relations. The event was hosted by the United Negro College Fund. Ambassador Young was instrumental in the civil rights movement and worked alongside the legendary civil rights leader, Dr. King. Mr. Young served the state of Georgia in Congress, he was the first African-American U.S. ambassador to the United Nations and also served two terms as the mayor of Atlanta. He continues to be a pioneer and champion in our nation and across the globe for equal rights.

Continuing its annual tradition, Orange County held its Black History Month Luncheon on Feb. 17, an event coordinated by the BHCOC. Citizens and employees gathered on the lawn of the Orange County Administration Center for the free event that included food vendors, live entertainment, artists and informational booths about services available throughout the County.

Orange County and the BHCOC have worked together for many years to develop programs and activities to support the goals and achievements of the nation’s brave and beloved African-American civil rights and community leaders.

The BHCOC has helped future generations through their educational and community efforts to academia. Since 2004, the committee has provided more than $300,000 in community donations and scholarships to Bethune-Cookman University, Edward Waters College, Florida A&M, Florida Memorial University, University of Central Florida, Valencia College and Rollins College.

Orange County Mayor Teresa Jacobs hosted the sixth annual Jazz in the Park on March 4 at the majestic Cypress Grove Park. The event...

The challenges facing urban entrepreneurs and the best ways to overcome them were among the discussion topics at the inaugural Urban Entrepreneur Roundtable held...