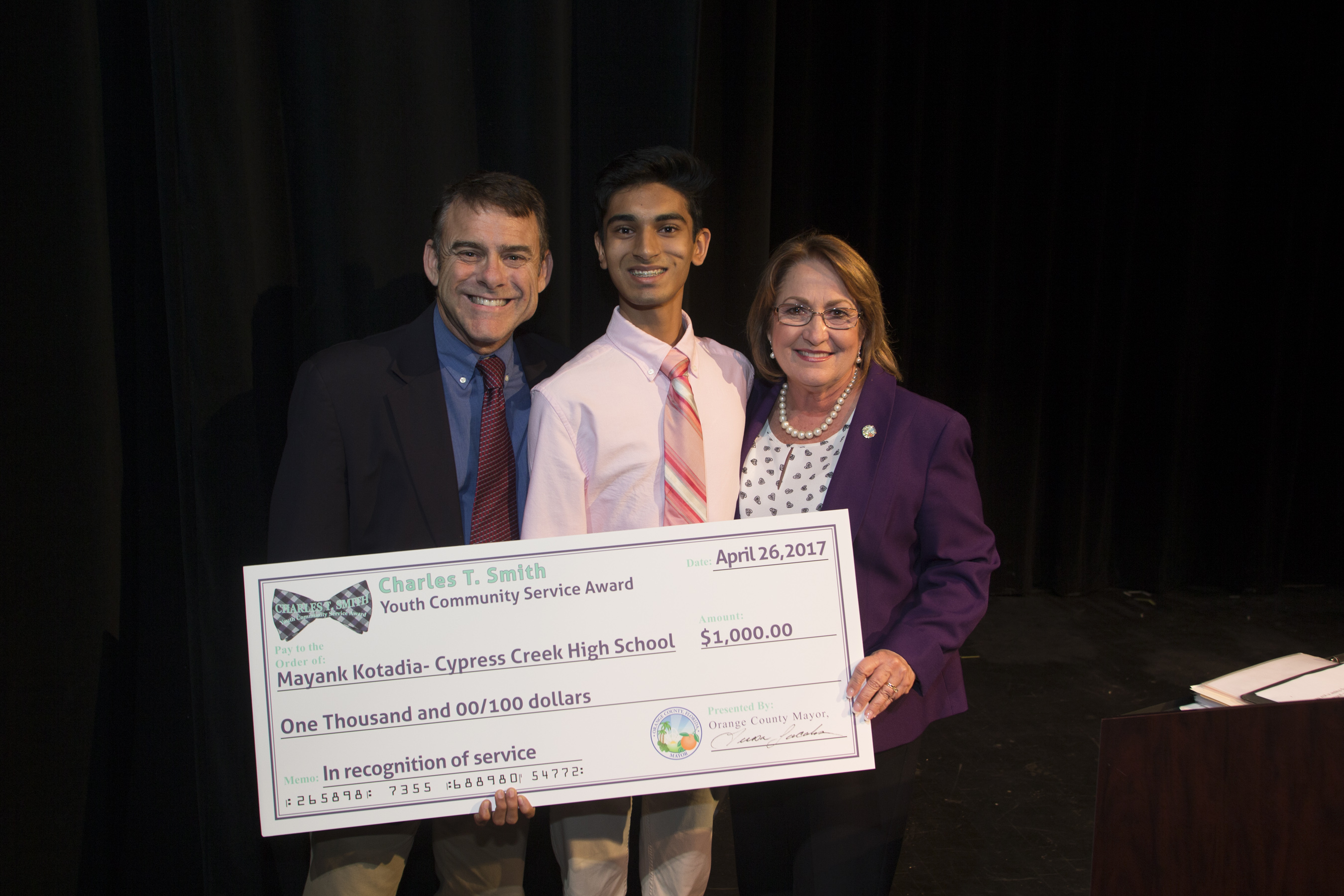 The award recognizes an outstanding high school junior or senior who has shown dedication toward making a positive impact in their community through service and volunteerism. The award honors the life and memory of Charles “Chase” Smith who devoted his life to public service and improving his community.

Kotadia demonstrates a passion for community service and volunteerism through his work with the Boy Scouts of America Central Florida Council, and believes in helping his neighbors and the extended Orange County community. He truly believes that one person can make a difference in the lives of others and used this drive to create an Ecology Garden Bed near Southwest Middle School. Through the help of donations from the community and volunteers working on the project, Kotadia was able to transform a neglected and forgotten area into a flourishing garden of stromanthes and bromeliads.

“Not only did this event teach me the true skills required in a leader but it also involved me in my community in a different and meaningful way,” Kotadia wrote in his reflective essay. “I came to realize that I could have a really positive effect on the people and places where I lived.”

Chase Smith was a fourth generation Floridian and was born and raised in Wauchula, Florida. He was a Wauchula City Commissioner in Hardee County for 12 years. Elected in 1992 when he was only 20 years old, he defeated the odds by becoming the youngest elected official in Hardee County history. Throughout his three terms, Smith worked to better his hometown by serving as the voice for the next generation of citizens, while still being able to understand and relate to the concerns and issues of the entire city population.

Mayor Jacobs met Smith during her campaign for Mayor and, in February 2011, extended an invitation for him to join her administration as an Aide for Constituent Relations and Outreach. He quickly learned the intricacies of a large government and, in August 2011, Mayor Jacobs appointed Smith as Orange County’s first Ombudsman. Smith was selected for this role because of his extensive understanding of County government divisions and his passion to serve the community.

“Chase was a man of courage, honesty and compassion. He truly put others before himself, giving his time and talents freely,” said Mayor Jacobs in her address to the students. “To those looking to make their mark in the world, I urge you to follow Chase’s example and start now in setting and achieving your goals.”

On August 28, 2013, Chase lost his battle to cancer. The Charles T. Smith Community Service Award was created to honor his memory and legacy.