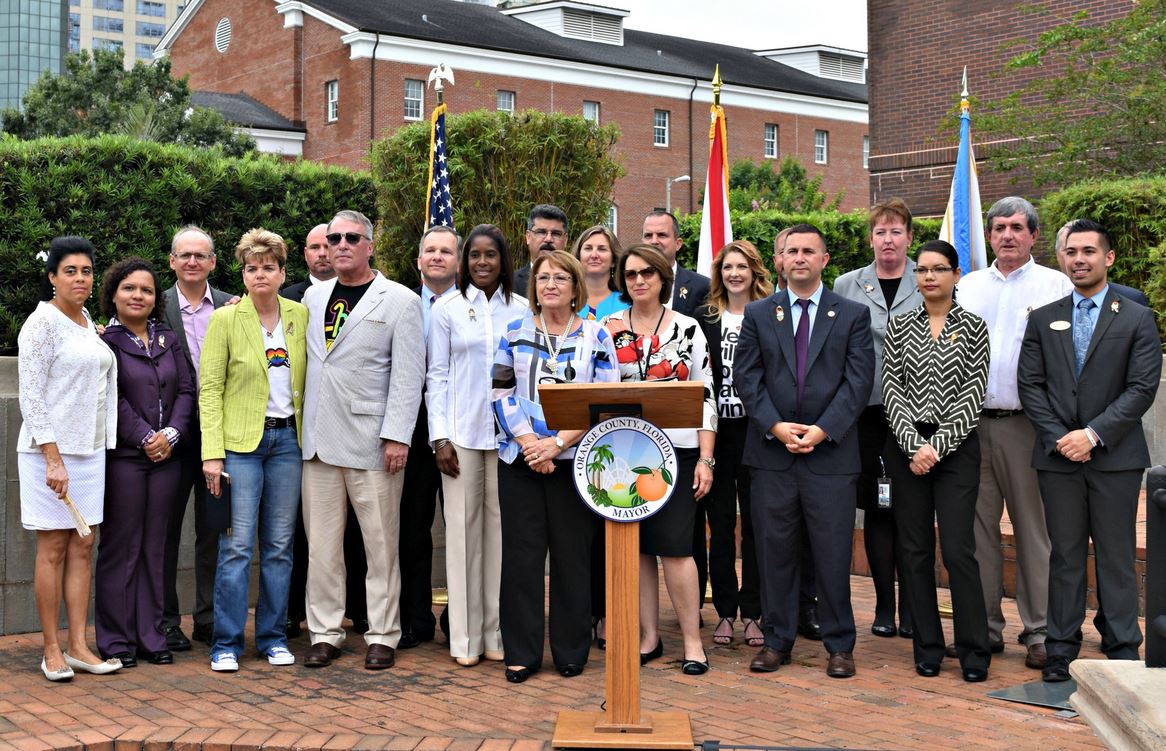 To honor the one-year remembrance of the Pulse nightclub tragedy, community partners throughout Central Florida hosted several events to pay tribute to the 49 innocent lives lost on June 12, 2016.

Orange County Government, the City of Orlando and onePULSE Foundation are hosting Orlando United Day | A Day of Love and Kindness on June 12, 2017. The County, the City of Orlando, the One Orlando Alliance and the entire community will observe June 12 as a day of love and kindness as we mark the Pulse tragedy.

The Pulse Nightclub Reflections and Remembrance will be held from 11 a.m. to 1 p.m. and the Orlando Love: Remembering Our Angels at Lake Eola Park Amphitheater begins at 7 p.m. The community is invited to conclude the evening with a series of prayers, live music, inspirational dance and reflection at 10 p.m. for the Moments of Hope and Healing at Pulse Nightclub. For a full listing of events, please visit www.OrlandoUnitedDay.com.

On June 11, several buildings and landmarks across Central Florida were lit in rainbow colors including the Orange County Convention Center, the Orange County Regional History Center, The Orlando Eye, the fountain at Lake Eola and structures on the major roadways like the East-West Expressway, State Road 408.

The University of Central Florida (UCF) hosted four events on June 8. “Reflections on Pulse,” was an event where participants could create and share art tributes to the 49 victims, and was followed by the “UCF Remembers Blood Drive.”

The UCF Art Gallery also welcomed “Resilience: Remembering Pulse,” and displayed an exhibition of photographs, quilts, paintings and stories to honor the victims. In the UCF Student Union, the “UCF Remembers” ceremony invited the community to campus for a day of reflection, giving back and coming together. The ceremony presented a video introducing mural designed by artists Michael Pilato and Yuriy Karabash. The event included performances by the Orlando Gay Chorus, a reading of the 49 victims’ names and community speakers.

Valencia College created the Valencia College Valencia United LGBT+ Scholarship to support students who promote diversity and social justice for all people, and to honor the seven Valencia student victims who died at Pulse on June 12, 2016. The scholarship fund has already reached $25,000 and will continue raising money.

Rollins College will participate in the One Orlando Alliance ringing of the bells on June 12 at noon. Churches in Central Florida, across the nation and world, will ring their bells 49 times to commemorate the 49 victims. Rollins also held a reflection in their Knowles Memorial Chapel for the students on campus and the surrounding community. The college will provide a ride-share program from Rollins to Orlando Love – Remembering Our Angels at Lake Eola for students, staff and faculty.

On June 11, Enzian’s Film Slam also hosted a tribute to those lost in the Pulse tragedy and recognized survivors as well. The event showcased two films Full Sail students contributed to, played at the Enzian Theater.

A collection of photos from the tributes and remembrances are available for use by the media and are located on Flickr.

Featured Photo Caption: Orlando United Day began with Orange County Government and the City of Orlando providing a joint proclamation with the One Orlando Alliance and onePulse Foundation observing the one-year remembrance of the Pulse Nightclub tragedy.

On Dec. 12, Orange County Government and the City of Orlando hosted a Pulse Six-Month Remembrance Ceremony to honor the 49 victims, their families...

Central Florida Sports teams came together and stood Orlando United with the community after the tragic Pulse Orlando nightclub shooting on June 12, when...

Equality Florida Greater Orlando and the Central Florida community paid tribute to those whose compassion, courage and leadership united the region in the aftermath...