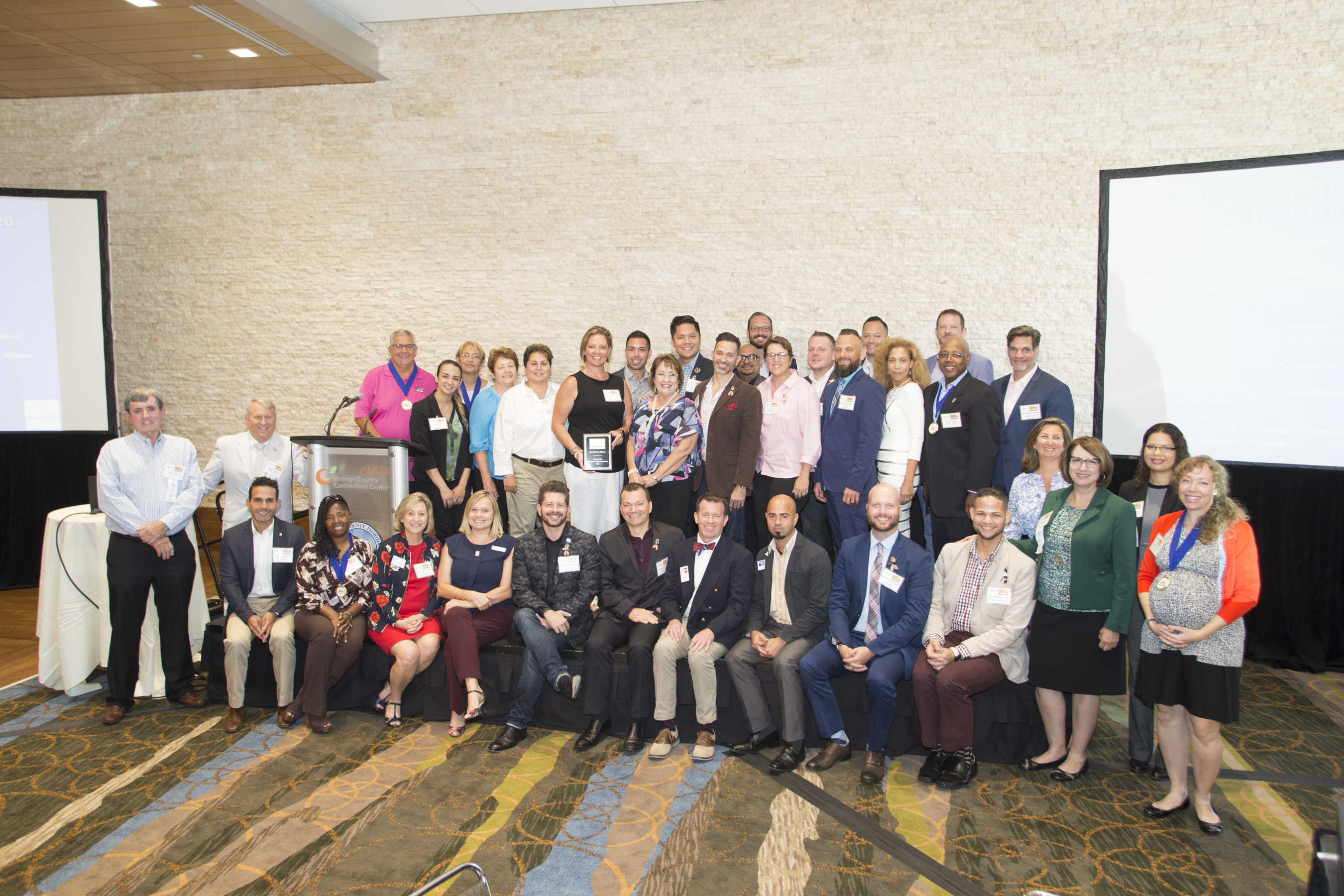 Orange County Mayor Teresa Jacobs and the Board of County Commissioners recognized several Community Champions and the 2017 Distinguished Citizen of the Year at the 22nd Annual Community Conference held at the Orange County Convention Center on July 15.

On June 12, 2017, Orlando United Day | A Day of Love and Kindness, Orange County joined the City of Orlando and onePULSE Foundation to observe the one-year remembrance of the Pulse Nightclub tragedy. The One Orlando Alliance joined Orlando United Day with the Acts of Love and Kindness movement, which encouraged the community to honor all those who have been affected by the Pulse tragedy. By June 12, nearly 6,000 volunteer hours were reported and thousands of positive posts were shared via social media. Engaging in the movement was a respectful and loving way to remember and honor the lives of those taken and to show compassion to those who need support.

On June 12, 2016, a gunman killed 49 people and injured 68 others at Pulse Nightclub in the City of Orlando. It is considered the deadliest mass shooting by a single gunman and the deadliest incident of violence against the LGBTQ community in modern U.S. history.

“Our neighborhood organizations, community leaders and active citizens have played a vital role in creating our culture of compassion and collaboration. Each of you work hard to protect, revitalize and shape our community, as well as engage citizens and bring people together,” Mayor Jacobs said to conference attendees. “Your tireless and unrelenting efforts have created a sustainable community in which everyone can thrive now, and future generations will be able to enjoy for years to come.”

In addition to Mayor Jacobs’ 2017 Distinguished Citizen, each Orange County Commissioner recognized an individual in their district.

District 1:
The District One Citizen of the Year, Haki Nkrumah, founded The Young Fathers of Central Florida with the goal of improving teen fathers’ participation in their children’s lives. He has taught parenting classes and helped navigate the legal system for teen fathers, both for child support and visitation. He hosts an annual Father’s Day week-long event and brings in experts to speak to young men. He also holds conferences to share best practices and hosts speakers from other communities with new ideas to help teen fathers. He is an advisor to Fathers in Education and is a Florida Supreme Court Certified Family Mediator.

District 4:
The District Four Citizen of the Year, Victor Collazo, promotes good citizenship and has a true passion for his community. He has served on numerous local civic and charity boards including the Avalon Park Foundation, Avalon Park YMCA, Starfish Fund, CURE Bowl, local churches and more. From his service with these organizations, he has provided “Blessing Bags” for the homeless, raised funds for those struggling through hard times and provided countless hours of community service opportunities for students.

District 5:
District Five’s Citizen of the Year, Maria Bolton-Joubert, has been involved with Florida’s Water and Land Legacy Campaign, Floridian’s Clean Water Declaration Campaign and with Floridian’s for Solar Choice Campaign. She is also involved with the Ban Fracking in Florida Campaign and the “No Foam Zone” polystyrene ban in the City of Orlando. As a community advocate, she actively encourages others to be in the know, encouraging them to attend meetings to get on public record.

District 6:
District Six’s Citizen of the Year, Frank Brantley, Sr., has lived in Orange County since 1951 and has volunteered his time, talents, and money to help his community thrive. He served his neighbors in various roles including neighborhood watchman to the resident landscaper of homes along Mary Church Court and Prince Hall Boulevard, faithfully mowing their yards weekly. He annually hosts, Brantley’s Family Mother’s Day Brunch, to help single mothers in the community.

The annual conference strives to educate and assist citizens on how to revitalize their neighborhoods and make them the best possible places to live. Citizens, community leaders, homeowner’s association leaders and nonprofit organizations came together during this event to share ideas about improvements that can be made in their counties.

Photo Caption: Mayor Teresa Jacobs and the Board of County Commissioners gathered at the 2017 Community Conference with community champions awardees.