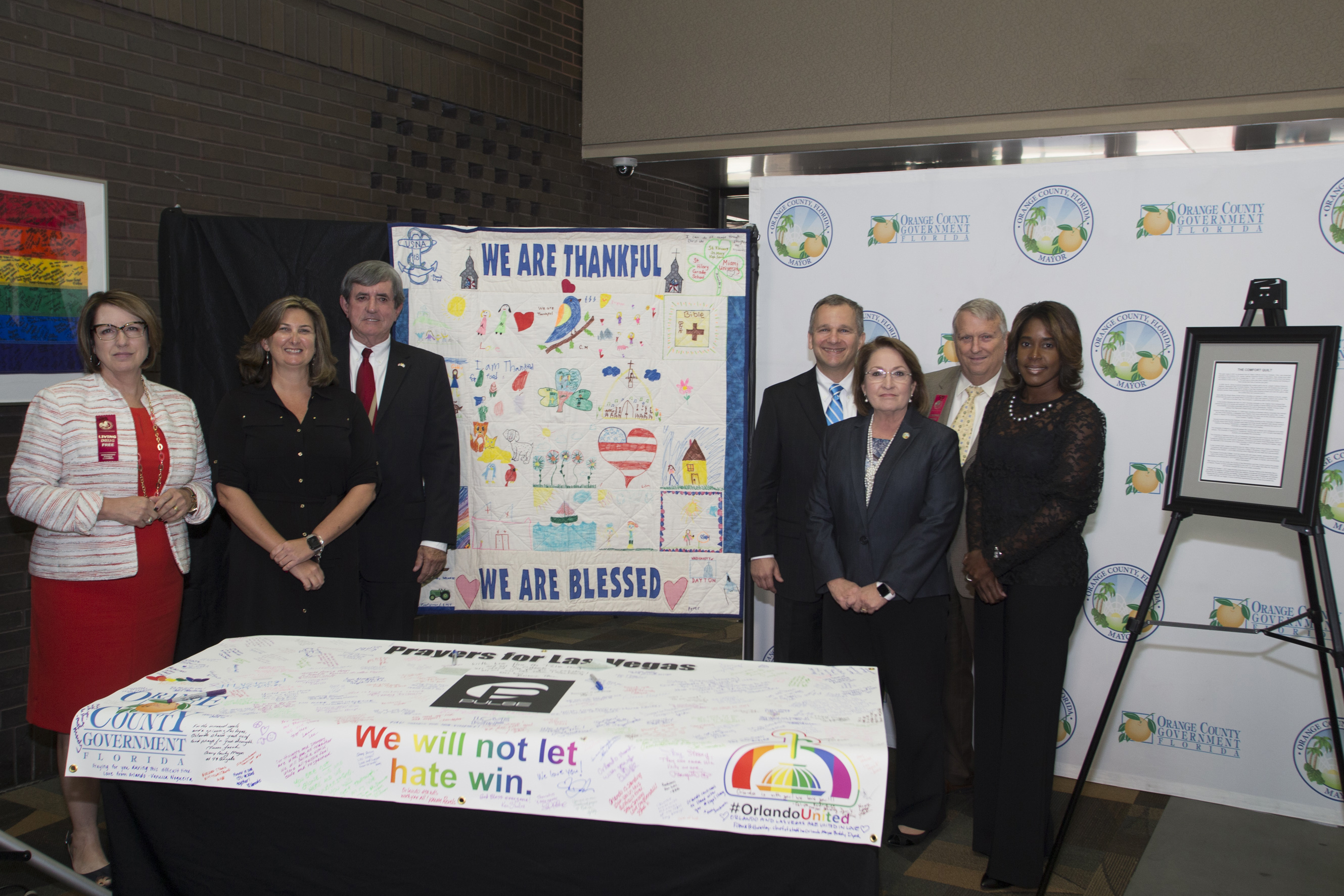 Orange County Mayor Teresa Jacobs and the Orange County Board of County Commissioners (BCC) gathered to honor the lives lost during the Route 91 Harvest Country Music Festival tragedy on the Las Vegas Strip on Oct. 1. Together, Mayor Jacobs and the BCC formally transferred ownership of the Comfort Quilt to the Las Vegas community during a press conference on Tuesday, Oct. 17.

The Comfort Quilt was given to Orange County after the Pulse Nightclub tragedy on June 12, 2016. The quilt was a gift from the community of San Bernardino, California where 14 individuals had been killed on Dec. 2, 2015.

“The Comfort Quilt has traveled across the nation, from community to community, as a symbol of peace and healing and to bring comfort to those who are suffering,” Mayor Jacobs said. “We send our love to the Las Vegas and Clark County communities and stand united with the innocent victims, their families and loved ones, and the survivors of this tragedy.”

On June 12, 2016, Orange County was impacted greatly by hatred and a senseless act of violence against the LGBTQ, Latinx and Hispanic communities at Pulse Nightclub when a gunman killed 49 people and injured 68 others at Pulse in the City of Orlando. More than a year later, the community continues to remember our 49 brothers and sister, their families and the survivors as they continue to heal with the LGBTQ, Latinx and Hispanic communities from the tragedy.

The quilt was originally created by first-graders from St. Hilary Catholic School in Fairlawn, Ohio in 2001 in the wake of the Sept. 11 attacks. The first-graders made the quilt to give to children at St. James Catholic School in New Jersey, who had lost parents and loved ones in the attack. Since then, the Quilt has traveled to communities in the United States that have experienced traumatic events in their cities.

After the transferring of the Quilt, a memorial banner was available for the community to sign following the BCC meeting in the Orange County Administration Building. The banner will accompany the Quilt to Las Vegas to be presented to the City of Las Vegas Mayor Carolyn Goodman. The banner was also signed by the community at the onePulse Foundation Inaugural Town Hall meeting on Oct. 10.