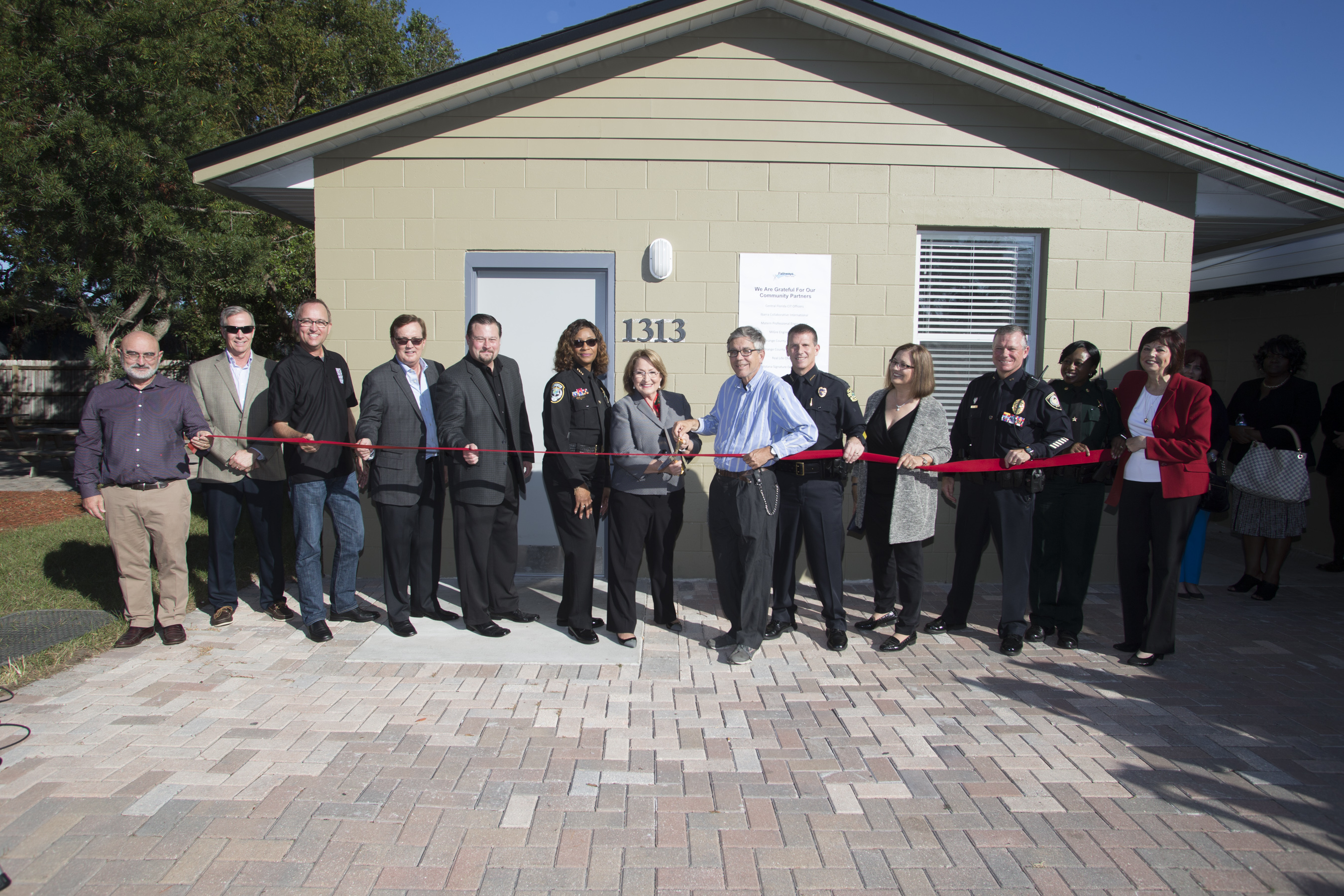 The rebuild was made possible through the support of an $80,000 Orange County Government Community Development Block Grant, which is an entitlement grant provided by the United States Department of Housing and Urban Development, along with the partnership of a number of community businesses who donated their expertise and services. In total the project was an estimated $120,000 renovation. The expansion of the facility offers individuals a safe-haven to gather during the day, connect with health and social services, as well as sleep or take a hot shower and wash clothes. It is a place without judgment and stigma and without any cost to the individual receiving assistance.

Surrounded by Mayor Jacobs and several law enforcement chiefs, Nelson Kull, founder of Pathways, said he was “thrilled” by the morning’s show of support. Kull’s passion to help others living with mental illness stems from his own very personal experience which led him to establish Pathways in 1993.

The program operates in partnership with National Alliance for Mental Illness as well as Orange County Government and the Crisis Intervention Training program. Perhaps what makes Pathways most unique is that while it not only touches a very vulnerable population, it’s also managed by individuals who themselves live with mental illness.  On a given day, Pathways may help as many as 50 people.

“Many of us know someone living with mental illness, so for us too this is a very personal mission. I could not be more proud of this organization, and more proud that Orange County has been a part of this rebuild,” Mayor Jacobs said. “The founder of Pathways, along with their board and members, all serve as living examples to so many. Their unique perspective allows them to connect in a way that many others cannot. Ultimately, it’s this connection that helps someone find their own successful path.”

Pathways’ mission has also helped to establish a strong community network comprised of multiple law enforcement agencies, the Orange County Jail and mental health providers to ensure that individuals experiencing a mental health crisis are connected with services, as an alternative to incarceration or being placed under arrest when appropriate. Since, 2000, more than, 2,253 local correctional and law enforcement officers have voluntarily completed crisis intervention training, which helps them better identify, understand and respond to the needs of an individual they may encounter who is experiencing a crisis.

County Sheriff’s Office Major Denise Demps, who spoke at the event noted, that while there were many thanks extended to donors and law enforcement partners on this great day, it was really the representatives of law enforcement who wished to thank Pathways and all of their members for coming into their lives and ultimately making their lives even more enriched.

“My personal goal is for Pathways to be a permanent and perpetual and improving community asset for its members. Looking at you today I believe the goal is happening,” said Kull.

Featured Photo: Orange County Mayor Teresa Jacobs joined local law enforcement leaders for the Pathways Drop-In Center reopening, after a portion of the facility got destroyed in a 2013 fire.