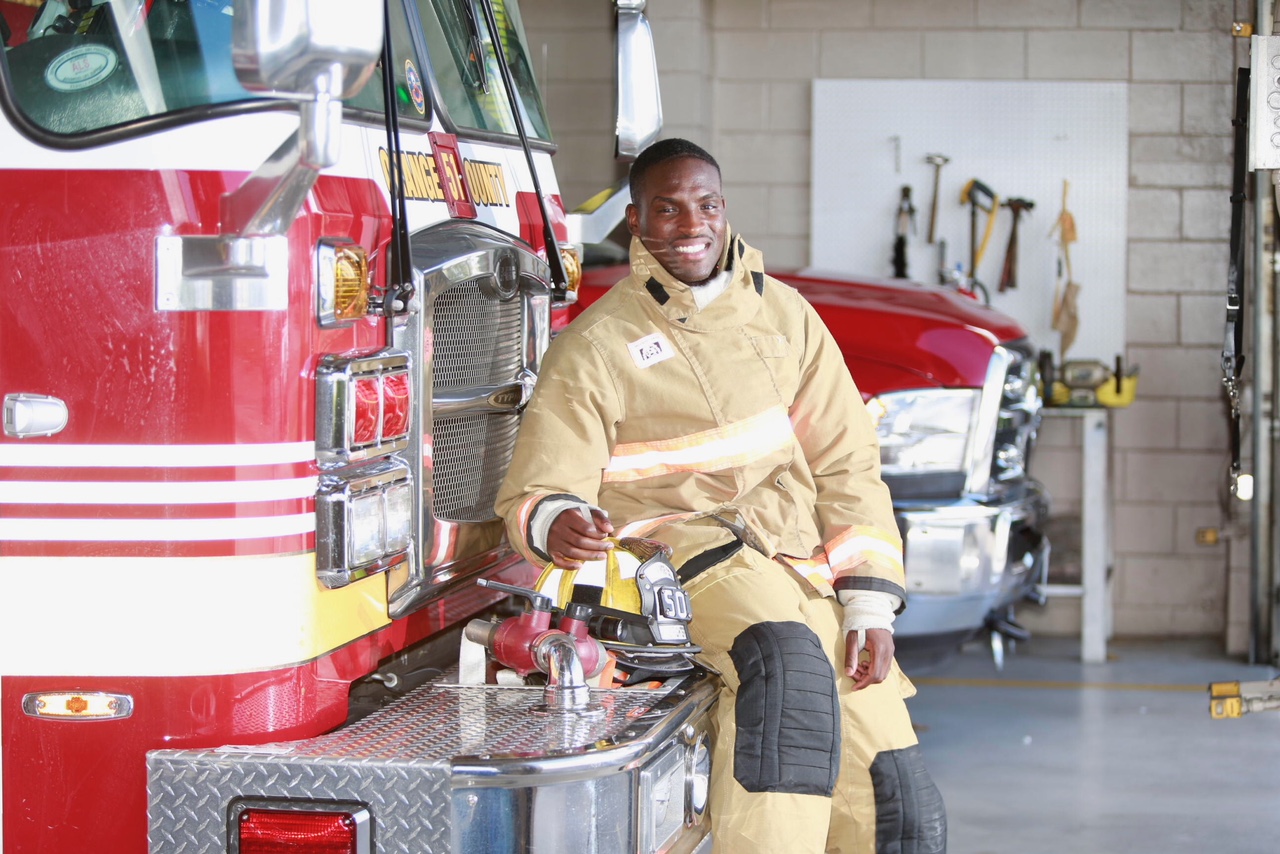 For SteveO Michel, a 26-year-old Orange County Fire and Rescue firefighter and emergency medical technician who grew up in the troubled Tymber Skan community in Orlando, his greatest joy is being a positive role model to children exposed to the same negative influences he experienced as a child.

“I was a disadvantaged young kid who was getting into trouble at school and needed guidance,” admitted Michel, who attended Catalina Elementary and Jones High School. “It was through a high school mentoring program I was paired with a firefighter, and I immediately fell in love with what he did.”

Michel believes having someone he could look up to, besides drug dealers, changed the course of his life. Between the mentoring program and playing football at Jones, under the tutelage of head coach Boris Jackson, he started down a better path.

“I see myself as one of the lucky ones,” Michel said. “I had people in my life who cared about me and taught me how to take responsibility for my actions. The streets were starting to have a negative effect on me, so I needed positive role models to pull myself out of that.”

Michel’s first love was football. With the help of Coach Jackson, he landed a full scholarship at Colorado State University, where he played outside linebacker for five years and majored in social work. The first in his family to graduate from college, Michel also finished with 20 credits worth of a master’s degree in social work at Colorado State before trying to play in the NFL. The NFL was not in the cards for Michel, but he always remembered how much he enjoyed shadowing that firefighter in high school.

“I loved everything about what I experienced – the leadership qualities these guys had, the brotherhood they shared, the physicality associated with the job, and especially the fact they were in a position to positively influence kids,” he said. “I kind of knew if I didn’t become a professional football player I would become a firefighter.”

On September 11, 2017, two years after professional football did not pan out, Michel became a firefighter.

“It’s everything I thought it would be,” he affirmed. “I take great pride in what I do.”

Michel is busy. Besides his work at Station 50 (less than half-mile away from Catalina Elementary), he can be found at the neighborhood YMCA, Boys & Girls Clubs of Central Florida or at Jones High School as part of the school’s alumni mentoring program. He also speaks at community and sports events imparting the same message – “You can make it out and be successful.”

“These kids need people in their lives who can inspire them, and now I can be one of those people,” Michel said. “As an African-American man who grew up in the neighborhood, these kids realize I walked in their shoes and understand their struggles. They can relate to my experiences and think to themselves, “I can be like him.’”

Michel added that some kids are picking up guns at the age of 14 and 15, but he wants them to pick up a fire hose and nozzle and show them a different way. To the other firefighters he works with, Michel is a hard worker and the best of role models.

“Orange County Fire Rescue is a diverse organization with individuals from all types of backgrounds, and it’s these experiences that shape them into the men and women they are today,” said Orange County Fire Chief Otto Drozd III. “I couldn’t be more proud of SteveO for his accomplishments and commitment to serving our community. He has realized his purpose in life is to help others, and he continues to do so on and off duty.”

Michel hopes to eventually open a non-profit agency and mentor program for at-risk youth. He believes it’s all about the right exposure, and he wants to take these kids to see colleges and see how professionals go about their daily work as contributing members of the community. He also wants to write a book about his life and the importance of mentors in order to motivate others.

“It’s about positive reinforcement, not negative,” he said. “Someone has to show them the way. I want to be a positive vessel for my community; this is my passion and purpose.”