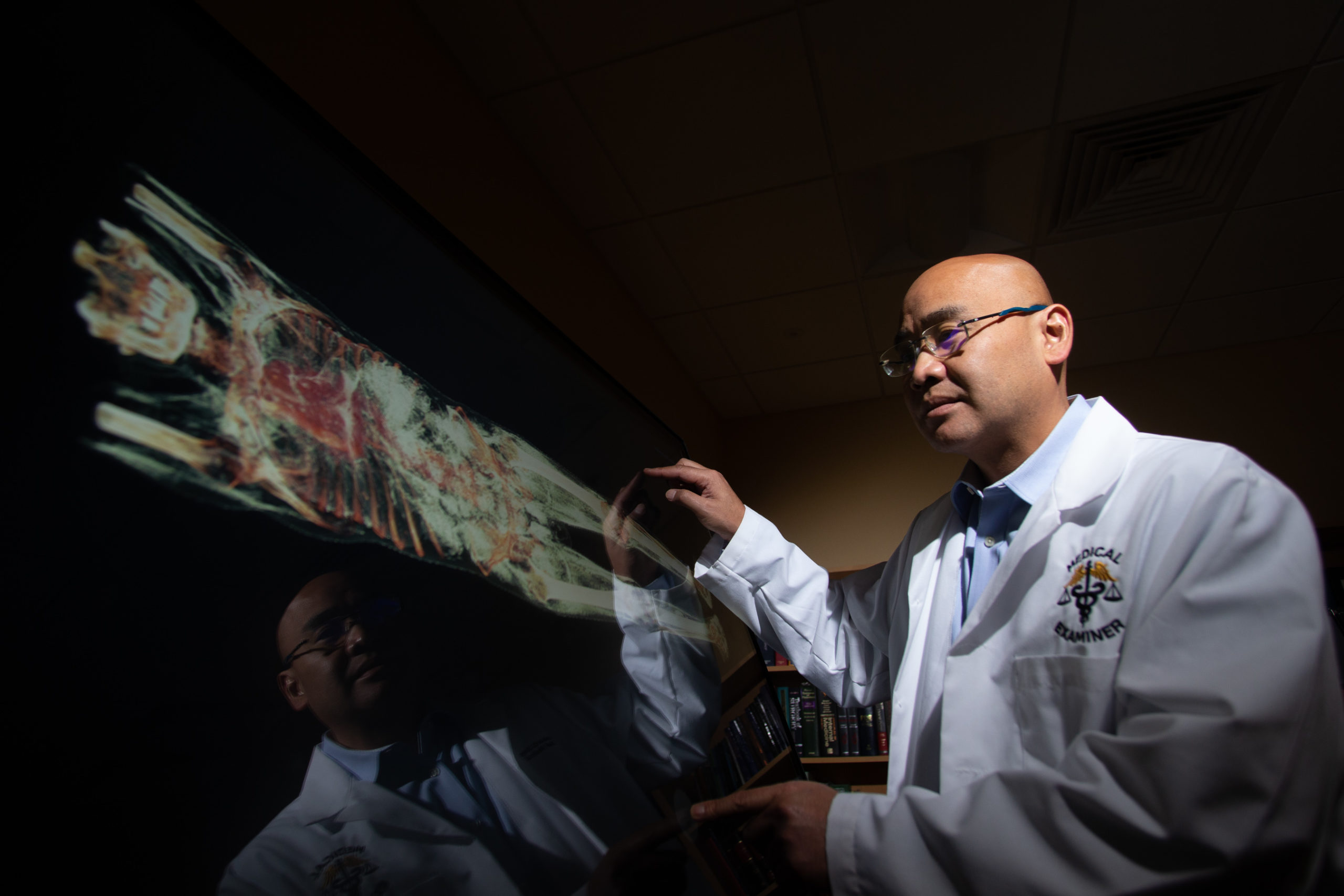 When the Orange County & Osceola’s District Nine Medical Examiner’s Office moved to its new facility on Michigan Street in 2009, the building was equipped with a room designed for a CT scanner, featuring  lead-lined walls to protect practitioners from radiation. A new addition to their high-tech toolbox is the purchase of the Anatomage Virtual Anatomy Dissection Table. It is the only medical examiner’s office in the country to own this remarkable machine.

The impetus to acquire the table, which basically transforms 2D images into 3D images, came from Medical Examiner Joshua Stephany, M.D., who first saw the device in Tennessee while shooting a TV pilot for NBC Universal. “They had it on set for me to pretend I was looking at it,” he said, “but I saw what it could do and was extremely impressed.”

Dr. Stephany believed it would be a useful tool to use in tandem with the office’s CT images for the forensic pathology setting. He had Sheri Blanton, forensic senior program manager, submit a proposal to the County’s Public Safety Grants Coordination Committee for the 2018 Edward Byrne Memorial Grant cycle.

The office was notified by the committee in August 2018 that the $61,000 table was on the list of selected projects. The Mayor and Board of County Commissioners officially approved the grant award in February 2019. The bid for the table was pushed out in April 2020, and, after some unavoidable COVID-19 delays, it was finally installed on January 13, 2021.

“Orange County understands what our office does and what we need,” said Dr. Stephany. “Anytime we ask for something that will make things easier and more efficient, the County has been very supportive. If we can show it will benefit our residents and help our office, it’s always willing to work with us.”

The Anatomage Table has traditionally been used in medical schools as a teaching tool, and District Nine is the first to use it for post-mortem studies. By rotating and resolving images with a touch screen, one can more accurately examine soft tissue and bones. According to Dr. Stephany, the machine allows him and his staff to do their work “a lot cleaner.”

“We can see damage to an individual, such as coronary artery disease, broken bones and traumas, without having to dissect injuries,” he explained. “As a supplement to the autopsy, it’s incredibly helpful. In both Jewish and Muslim faiths, families are opposed to autopsies, and even though we’re allowed to do it by law, we don’t want to upset families if we don’t have to. So if we see something with this machine, sometimes we can avoid it.”

Dr. Stephany says the goal is to teach all appropriate personnel how to use it like it’s second nature to them. “We aren’t aware of everything it can do for us yet,” he said. “There are so many applications; we’re going to make the most of this incredible machine.”