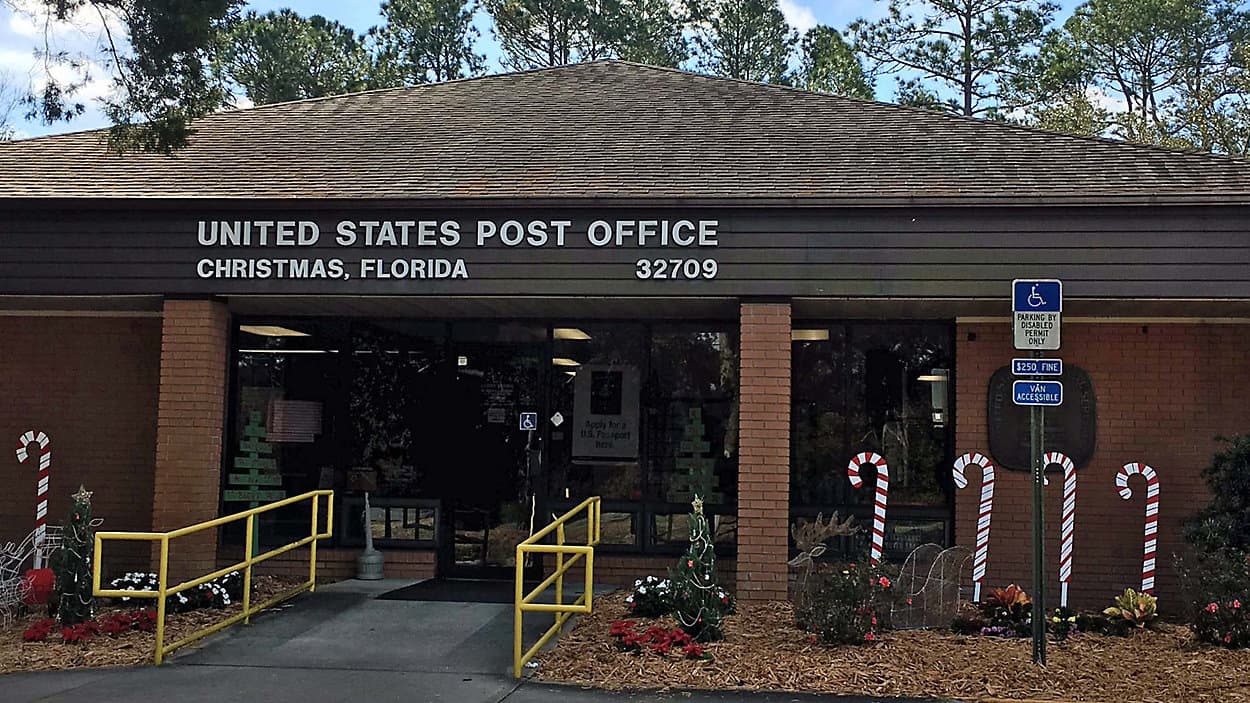 Many small towns in the United States have quirky names, and those with holiday-related names tend to get a lot of attention this time of year. Consider the communities of Santa Claus, Indiana; Bethlehem, Pennsylvania; and Blitzen, Oregon. Not to be outdone, Florida is home to the towns of Donner, Holiday, Saint Nicholas, Angel City and Star.

And then there’s Christmas (population 1,100) in east Orange County. It was originally named after Fort Christmas, a Seminole War stockade built by army soldiers on or around Christmas Day of 1837. One of the first families to settle in the area, the Tucker family, opened a post office in 1892. It was at this time the town dropped the “Fort” from its name, as the appeal of a letter postmarked from Christmas was popular even then.

Lizzie Tucker became postmaster in 1916, taking over from her husband, Drew. Their daughter-in-law Juanita had a 42-year tenure as postmaster, from 1932 to 1974, and helped foster the tradition of the Christmas postmark for holiday mail. She told an Orlando Sentinel reporter in 1992: “The post office was always the one place people could count on to get information and help. That’s what made it such a wonderful job.”

Every winter, people flock to the Christmas Post Office to decorate envelopes and packages with “Christmas, Florida” rubber stampers” for family and friends. Visitors walk up to the front counter and pick up Christmas-card boxes containing two stampers and an ink pad. There is even a special mail slot for Santa, who can sometimes be seen in the lobby personally stamping Christmas cards and packages.

A year-round Christmas tree stands at the intersection of Highway 50 and Fort Christmas Road with a sign that reads: “The permanent Christmas tree at Christmas, Florida is the symbol of love and good will; the Christmas Spirit every day in the year.” Cupid Avenue and St. Nicholas Avenue are the main drags through the Christmas Park neighborhood, and nearby reindeer-inspired roads include Rudolph Street, Dasher Street and Blitzen Avenue.

From all of us at Orange County, happy holidays!