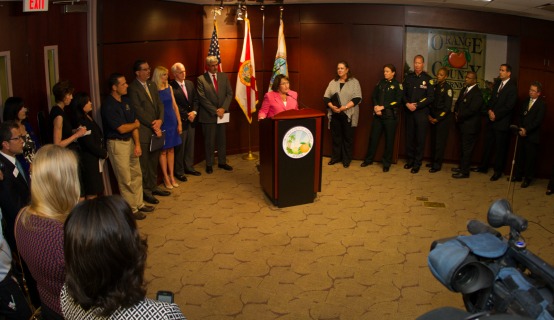 Out of 67 Florida counties, Orange County has recorded the second highest number of abuse reports with 13,855 cases. Additionally, within the first three months of the calendar year, eight children lost their lives in Orange County due to alleged abuse and possible neglect.

“We cannot ignore the fact that 80 percent of battered women also have children in the same situation, or the tragic consequences for so many of these women and children,” Orange County Mayor Teresa Jacobs said.

Members of the Orange County Domestic Violence and Child Abuse Commission will continue the vital work of the DVC while also working to protect the County’s most vulnerable—our children. In early 2015, the Commission helped spearhead new, critical domestic violence legislation.

“The combination of these factors helps create a perfect storm resulting in a high frequency of child abuse reports that demands local solutions to help support families and make children safer in this community,” Martinez said. “With an additional focus in place for the Domestic Violence and Child Abuse Commission, the community can be hopeful that a positive and permanent change is in store.”

A collection of photos from the Domestic Violence and Child Abuse Commission News Conference are available for use by the media and are located on Flickr.