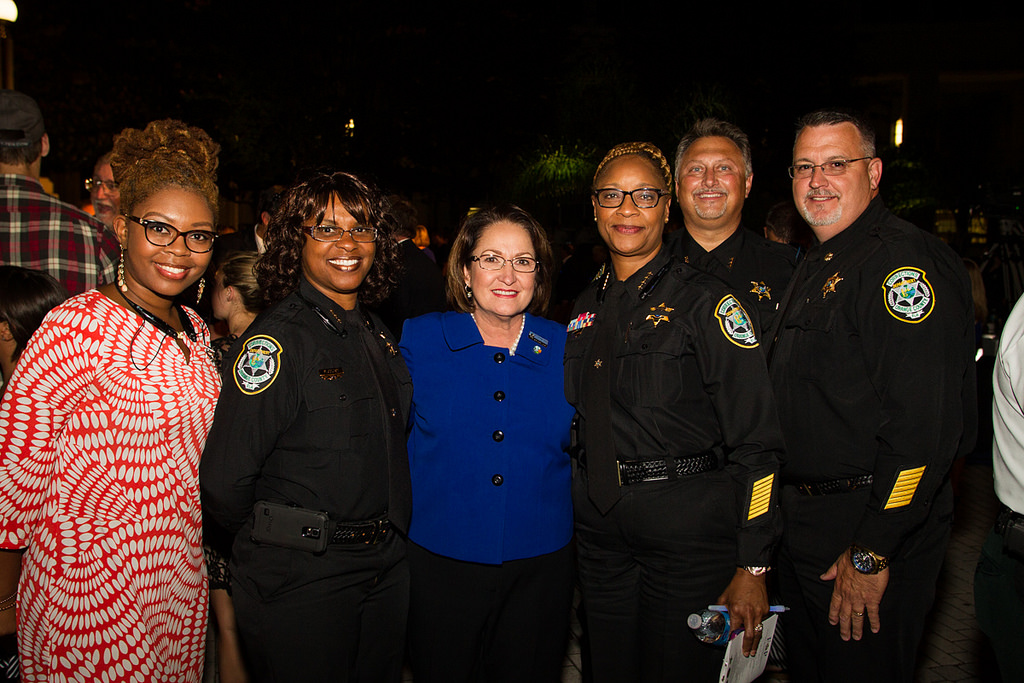 Mayor Teresa Jacobs and community leaders joined regional law-enforcement agencies on May 7 at the Orange County Law Enforcement Memorial Ceremony to honor the legacies of the region’s fallen law-enforcement officers.

Held annually at the courtyard of Orange County’s Courthouse, the ceremony paid tribute to those who have suffered a serious injury; officers who died of natural causes, and the brave men and women who currently serve the community in uniform.

The names of the 46 law-enforcement officers, who have died while serving Orange County since 1870, are engraved on the Law Enforcement Memorial Monument. The memorial is the centerpiece of the courtyard at the Orange County Courthouse and was dedicated in 2000.

Orange County continues to grieve for the loss of two officers who tragically lost their lives in senseless acts of violence in 2014 – Deputy Scott Pine of the Orange County Sheriff’s Office and Officer Robbie German of the Windermere Police Department. Their names were recently engraved on Tallahassee’s memorial wall to fallen law enforcement and will be added next to the National Law Enforcement Memorial in Washington.

Orange County Sheriff’s Office Sgt. Steven Reed and those who died of natural causes were honored along with six officers killed in Florida in 2014.

Guest speaker Janice DeSalvia, the mother of Orlando Police Officer George DeSalvia who was tragically shot and killed while on a traffic stop 15 years ago, spoke of grief as “a price of love.”

“We live in a chaotic, upside down society. But not tonight, tonight we honor our heroes,” DaSalvia said.

The ceremony, sponsored by the Fraternal Order of Police, began with a memorial parade to the courthouse grounds of motorcycle officers, honor guards, bag pipe players, drummers, uniformed personnel, survivors and guests. The motorcycles from various law-enforcement agencies lined the sides of the plaza and later illuminated the courtyard with red and blue lights during the lighting of blue candles at dusk.

Stories of all the fallen law enforcement officers honored at the Orange County ceremony can be found by searching the name of the agency through a nonprofit organization, Officer Down Memorial Page, Inc.

A collection of photos from the 33rd Annual Orange County Law Enforcement Memorial Ceremony are available on Flickr for use by the media.