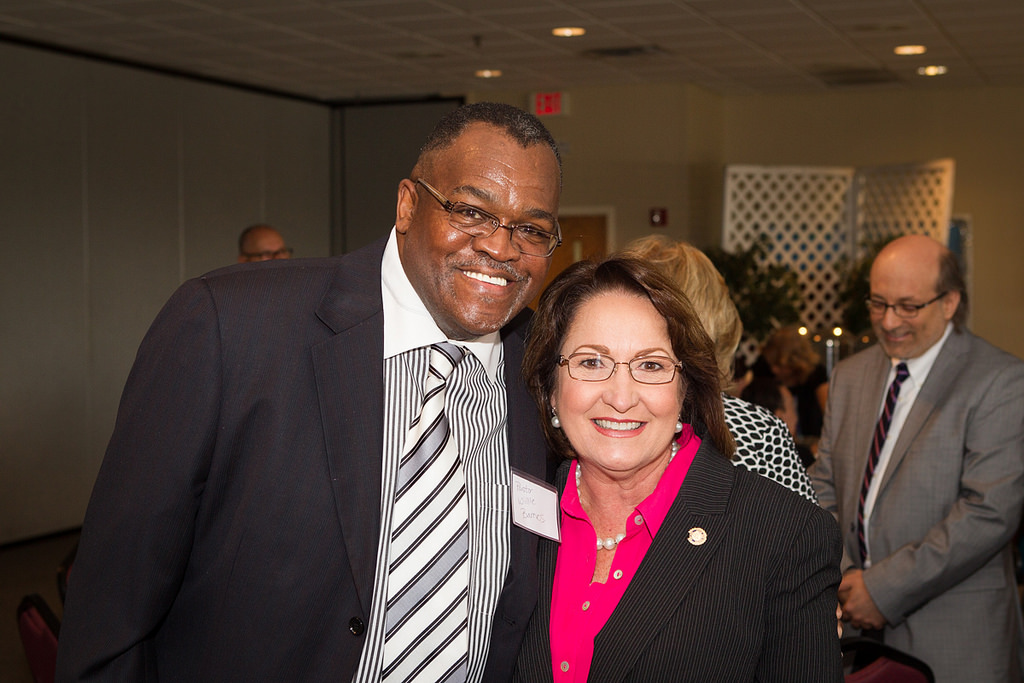 Orange County Mayor Teresa Jacobs announced a new partnership with the faith community on May 4 that will transform the lives of youth at-risk of being homeless and families living in poverty.

Joined by the County’s Health Services Department team and about 80 members of Central Florida’s faith community, Mayor Jacobs announced the launch of “Open Table” in Orange County. Open Table is a thriving model expanding nationally and aimed at helping people to create change by accessing the “intellectual and social capital” available within a congregation.

“Our Central Florida community has a long history of caring for those in need. Through partnerships with faith, charitable, philanthropic and social service partners, we’ve worked to improve the lives of countless individuals, including those impacted by homelessness,” Mayor Jacobs said at the event. “In particular, we’ve made great strides in caring for the chronically homeless and our homeless veterans. But helping at-risk children and families transition from homelessness is an entirely different and much more complex challenge.”

To begin the program, churches and faith-based organizations sign a license agreement and pay a fee to access Open Table’s resources. Through a federal System of Care (SOC) grant from the Substance Abuse and Mental Health Services Administration, Orange County will supplement those licensing fees for churches that serve families or young adults referred by the SOC – Wraparound Orange. This ensures the Open Table model can begin immediately. Orange County is one of only three nationwide communities approved to use federal dollars to partner with Open Table.

The process will follow Open Table’s method, which includes assessments and background screenings. In addition to homeless or impoverished families, the model will also assist youth who are on the verge of homelessness and transitioning out of systems such as foster care.

Open Table launched in Arizona in 2006 and is now operating in almost 20 states with plans for ongoing national expansion. The program educates and trains congregation members to guide the homeless and families in poverty back into the community by changing their circumstances. A group of volunteers compose a “table” and commit an hour a week for a year to help the youth, individual or family to meet goals that they have established in a document called a “Life Plan.”

“This cannot be done solely by government or solely by the faith community,” said George Cope, pastoral director of Vision Orlando. “We’ve got to partner together.”

Two of the nonprofit’s leaders, Jon Katov and Judith Fritsch, were at the launch held at First Baptist Church to explain how the Open Table system works. Additionally, the team offered to meet personally with more than a dozen denominations that attended the meeting.

“Thank you to Mayor Jacobs for being a champion for human potential,” Katov said.

Open Table began as a chance encounter with an Arizona man named Ernie who was experiencing homelessness in late 2005. The story begins with Ernie asking members of a church youth group serving food at a Phoenix homeless shelter if he could worship at their church. They brought him to church every Sunday from the shelter, which led to a strong bond and relationship among several congregants. These members formed a group and became personally involved in Ernie’s plan and gave themselves a simple moniker – a table. The table met every week for eight months to develop a stability plan to help Ernie access employment, housing, healthcare and transportation. Ernie eventually found employment as a security guard and is now retired. He and Katov, his table leader, have maintained their close friendship for 10 years.

Mayor Jacobs has taken a leadership role in the effort to end homelessness. Together with advocates from the tri-county region and the Board of County Commissioners, Mayor Jacobs is working to transform the lives of our homeless children and families, the chronically homeless and the region’s military veterans. As a result, Orange County collaborates and provides funding for numerous community organizations that impact homelessness.

“Mayor Jacobs is a champion for youth mental health and a champion for the homeless,” Wyche said. “Through her leadership, she made sure we had a Families Committee as part of the Central Florida Commission on Homelessness. Open Table is the perfect way to bring together our work in those areas to accomplish even more.”

Orange County Government serves chronically homeless adults, veterans and vulnerable families and children through a variety of commissions and programs including the Domestic Violence and Child Abuse Commission; the Youth Mental Health Commission; the Prescription Drug Task Force and the Belvin Perry Jr. Central Receiving Center (CRC), which has served as a single point of entry for mental health, substance use disorders and homelessness since it opened in 2003.

A collection of photos from the Open Table launch are available for use by the media and are located on Flickr.