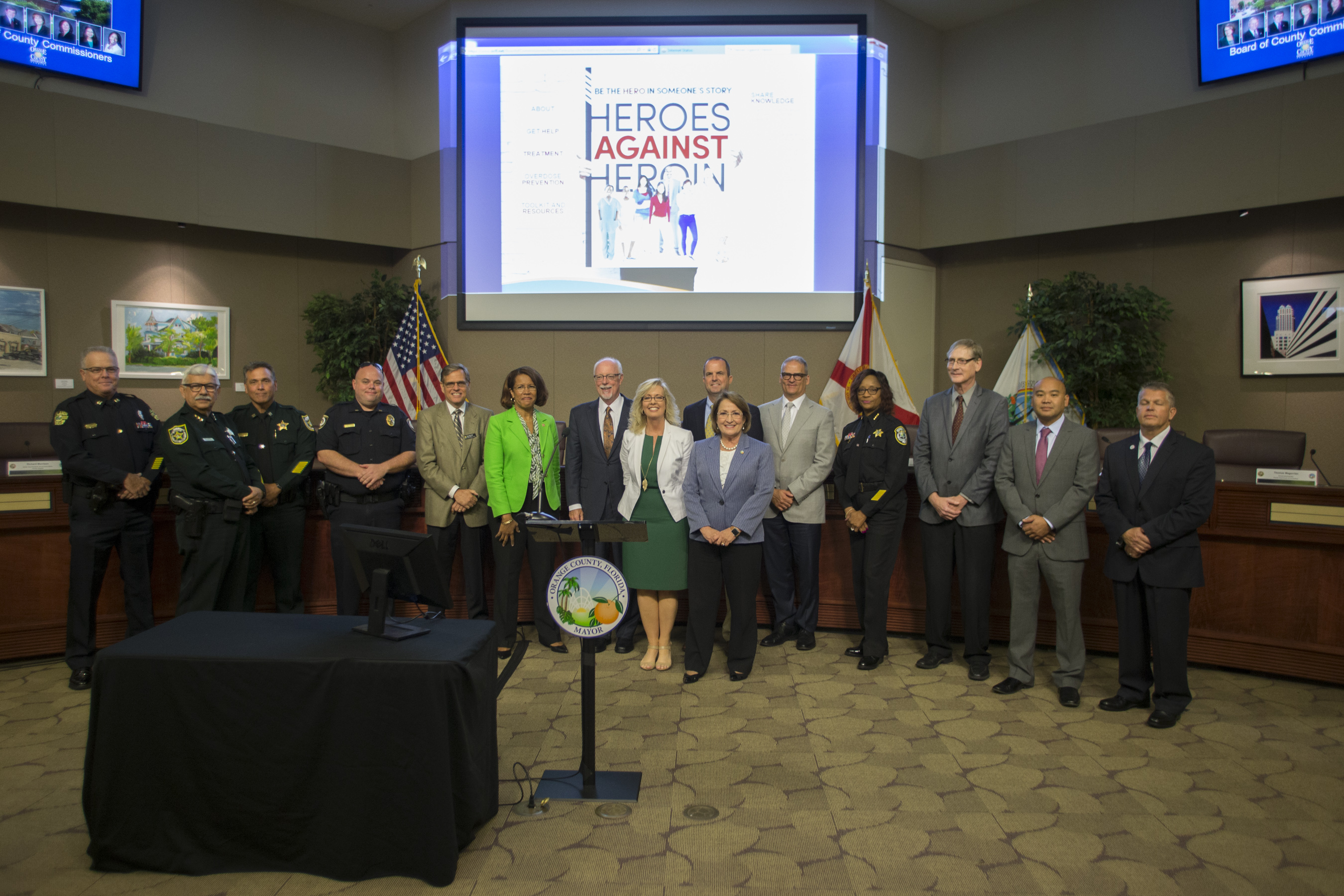 Mayor Teresa Jacobs and members of Orange County’s Heroin Task Force  announced the creation and launch of the Heroes Against Heroin campaign, one of 37 targeted recommendations made by the Task Force.

The website, www.OCFLHeroesAgainstHeroin.org, includes valuable and life-saving information on how to help someone overcome opioid addiction. The website is set up to provide simple but detailed facts about the opioid abuse epidemic, including treatment resources for those dealing with addiction and educates the community on how to prevent substance use before it starts.

“It’s absolutely crucial that we use every tool at our disposal to fight this epidemic – not only through treatment and law enforcement interdiction, but also through prevention. It’s vital that young people know how deadly opioids can be, and that they should never, ever try heroin or fentanyl – not even once,” said Mayor Jacobs.  “Through our newly launched Heroes Against Heroin website – a recommendation of the Orange County Heroin Task Force, which I convened in 2015, we are able to provide a wide variety of prevention, treatment and educational tools and resources.  Together we’re working to save families and loved ones from the heartbreak of addiction, and from the scourge of this heroin epidemic.”

The Heroes Against Heroin website hosts information on local treatment options, prevention resources and Naloxone, also known as Narcan, which can quickly reverse the effects of a heroin overdose if given before permanent damage to the brain and other vital organs occurs.

In addition to resources, the Heroes Against Heroin Toolkit, another product of the Task Force is now accessible online. Prior to launch, the toolkit was only available in hard copy format. The kit contains fact sheets, resource guides and a copy of the film “Chasing the Dragon,” which depicts the powerful stories of individuals battling addiction.

“Far too many Americans do not get the treatment they need to fight addiction. Through our innovative partnership and participation with the Orange County Heroin Task Force, we are focusing our collective efforts as one community on addressing the heroin epidemic by sharing information, resources and tools with individuals who need treatment or are in recovery,” said Maribeth Ehasz, Ph.D., Vice President for Student Development and Enrollment Services at the University of Central Florida.  “We are reaching out early and often to educational and family settings to help everyone understand the risks associated with drugs.  By working together, we can save lives.”

The Task Force was organized with several subcommittees to address areas in law enforcement, education and prevention, healthcare, and treatment.

Signature recommendations already implemented by the Heroin Task Force include:

ABOUT THE ORANGE COUNTY HEROIN TASK FORCE
Orange County’s collaborative, multi-jurisdictional Heroin Task Force was comprised of 22 key community leaders, lending their expertise and staff in the areas of law enforcement, healthcare, treatment, education and prevention as well as public policy.  The Task Force adopted 37 recommendations for implementation. In addition to legislative advocacy during the 2017 session, Task Force members were key to getting Naloxone (also known as Narcan) into the hands of more first responders – especially law enforcement – through legislative action in the 2016 session.  In partnership with Orange County’s Corrections team, the Task Force was instrumental in the launch of the Vivitrol program, a medication-assisted treatment program administered through the Orange County Jail that helps inmates fight addiction before they are released.

Orange County Mayor Teresa Jacobs testified before the U.S. House of Representatives Committee Oversight and Government Reform on March 22 as a key witness...