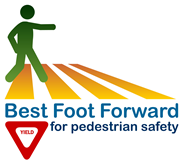 Mayor Jacobs is one of the 120 nationwide mayors – including the Mayors of Orlando, Casselberry, Kissimmee, Orange City and Longwood – who have so far signed an online pledge to participate in the Department of Transportation’s Mayors’ Challenge for Safer People, Safer Streets.

Since 2012, Orange County has been spearheading the development of a comprehensive local pedestrian safety initiative, the “Mayor’s Pedestrian Safety Program,” which will be presented to the Board of County Commissioners during an upcoming work session, and will launch later this Spring. In addition to the Orange County Pedestrian Safety Program, numerous local partners including Best Foot Forward, the City of Orlando, MetroPlan Orlando, LYNX, Orlando Health, Bike/Walk Central Florida, Orange County Public Schools, and local enforcement agencies have joined together to help boost pedestrian and bicycle safety, and to use the engineering, enforcement and education tools at the County’s disposal to improve street safety and create lasting, positive change.

“For several years, we’ve been keenly focused on pedestrian safety, and have already done a great deal of the groundwork on this issue,” said Mayor Jacobs. “Orange County will soon launch a countywide pedestrian safety action plan that will upgrade existing crosswalks, improve connectivity and work in partnership with businesses and facilities that have a high volume of pedestrian activity. These efforts will provide a safer environment for pedestrians and bicyclists that use Orange County roads to commute for work, school or leisure.”

The Mayors’ Challenge is based on the 2010 USDOT Policy Statement on Bicycle and Pedestrian Accommodation to incorporate safe and convenient walking and biking facilities in transportation projects. As part of the challenge, mayors are encouraged to form a local action team to advance safety and accessibility, and take local action on seven activities. This includes taking a Complete Streets approach that considers walking and biking as equals with other transportation modes, forming a local action team with goals, and educating and enforcing the laws.

“For the past 50 years, roadway planning and design has failed to account for people who walk or bike, evidence by our region’s ranking as most likely to be hit while doing something as simple as crossing the street,” said Linda Chapin, former Orange County Mayor and founder of Bike/Walk Central Florida. “While there is no one silver bullet, Best Foot Forward is an example of what a powerful coalition can achieve when they are united with a singular focus to improve street safety by getting more drivers to yield to pedestrians in crosswalks and for pedestrians to use crosswalks.”

The Mayors’ Challenge activities include various initiatives throughout the year, including identifying and addressing barriers to make streets safer, gathering and tracking biking and walking data, improving walking and biking safety laws and educating and enforcing proper road use.