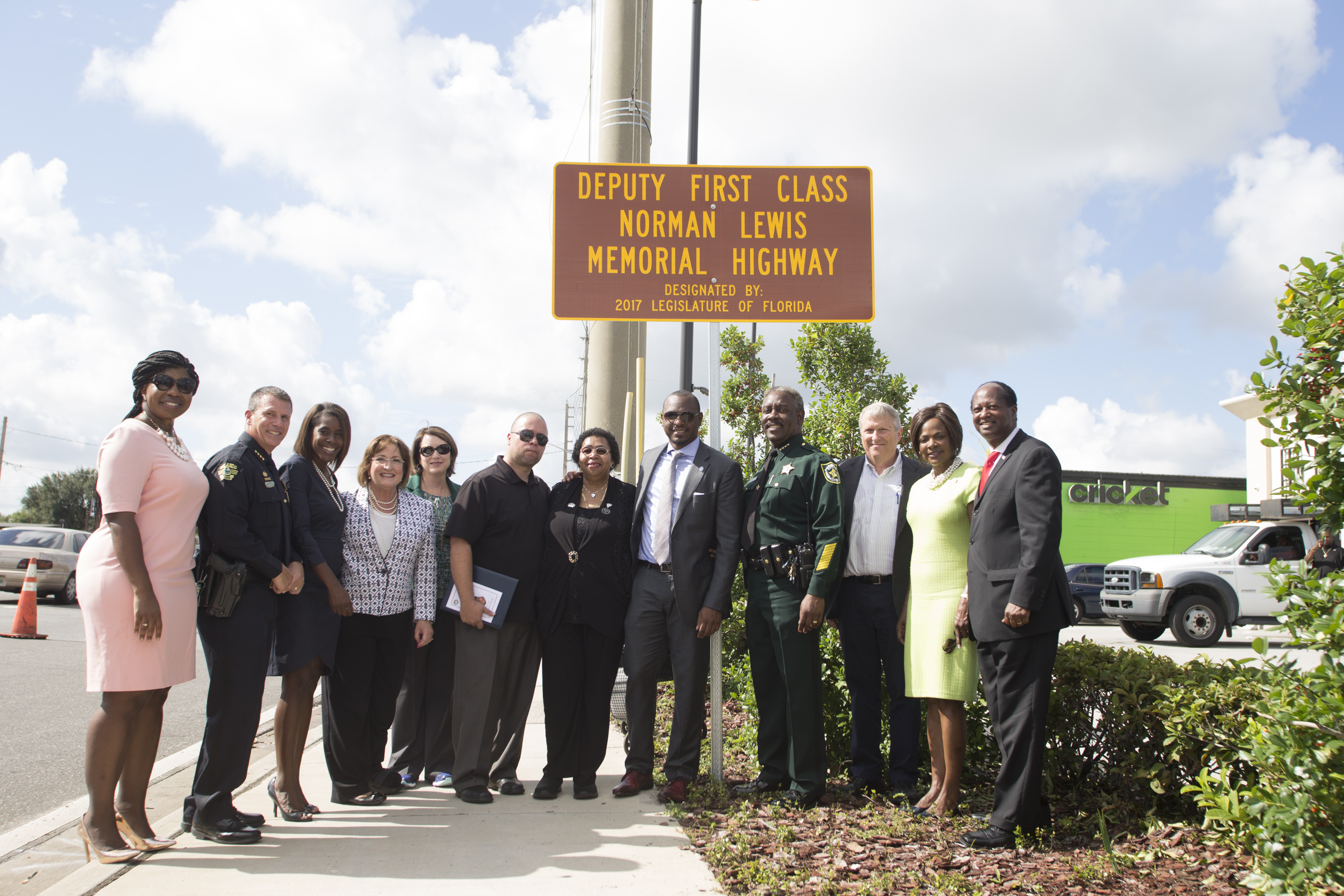 Lt. Clayton lost her life while protecting local residents when, without hesitation, she approached a dangerous and wanted fugitive who was later apprehended by law enforcement. DFC Lewis also died while serving in the line of duty when he immediately responded to the call for help in searching for the dangerous suspect who fled the crime scene and the death of Lt. Clayton.

Separate road renaming ceremonies were held and both events were attended by the families of Lt. Debra Clayton and DFC Lewis, the local law enforcement community, community leaders, elected official and dignitaries.

“Our community will never forget the sacrifices made by Lt. Clayton and DFC Lewis. As we continue to mourn this devastating loss, we must do everything possible to support their families and to forever honor the legacies and the lives of our local heroes who were taken from us much too soon,” Mayor Jacobs said. “One way to honor these and all law enforcement officers is to respect and appreciate their contributions, and to remember that each and every day, the brave men and women of law enforcement leave their homes and families – knowing that they may not return – and risk their lives to keep us safe.”

The loss of Lt. Clayton and DFC Lewis has been staggering. Beyond her contributions as a 17-year veteran of the Orlando Police Department, Lt. Clayton was a loving wife, mother, daughter and sister who dedicated her life to serving and protecting Orange County and the City of Orlando. At her deeply touching memorial service, family and colleagues reflected on Lt. Clayton’s extraordinary passion for assisting children and families from challenged neighborhoods.  Orlando Police Chief John Mina later promoted her to the rank of lieutenant, and on behalf of Orange County, Mayor Jacobs was honored to present a proclamation to Lt. Clayton’s family members at her memorial service.

DFC Norman Lewis was an 11-year veteran of the Orange County Sheriff’s Office. A former offensive lineman for University of Central Florida, his alma mater, DFC Lewis graduated with a bachelor’s degree in Criminal Justice and was sworn in as a Deputy Sheriff with the Orange County Sheriff’s Office on August 15, 2005. At his emotional January 15 memorial service, his peers, family and the extended law enforcement community reflected on DFC Lewis’ infectious smile, easy laugh, positive attitude, strong work ethic and passion for his family and community. As told by several deputies, DFC Lewis was famous among his peers for receiving “thank you” notes from motorists to whom he had actually given traffic citations. One motorist wrote that while “I am now poorer in my wallet than when we met, I am richer for the experience of someone who truly exemplifies a good cop.” Once again, Mayor Jacobs was deeply honored to present a proclamation in tribute to and remembrance of DFC Lewis to his family.

“By naming this roadway in tribute to your beloved son, brother, colleague and friend, it will serve as a place of remembrance for each of you,” Mayor Jacobs said at the road designation ceremony. “It will also serve as a visible reminder to our citizens and visitors of Deputy Lewis’ dedication to public service, and of our profound gratitude for the ultimate sacrifice he rendered while protecting the citizens of Orange County.”