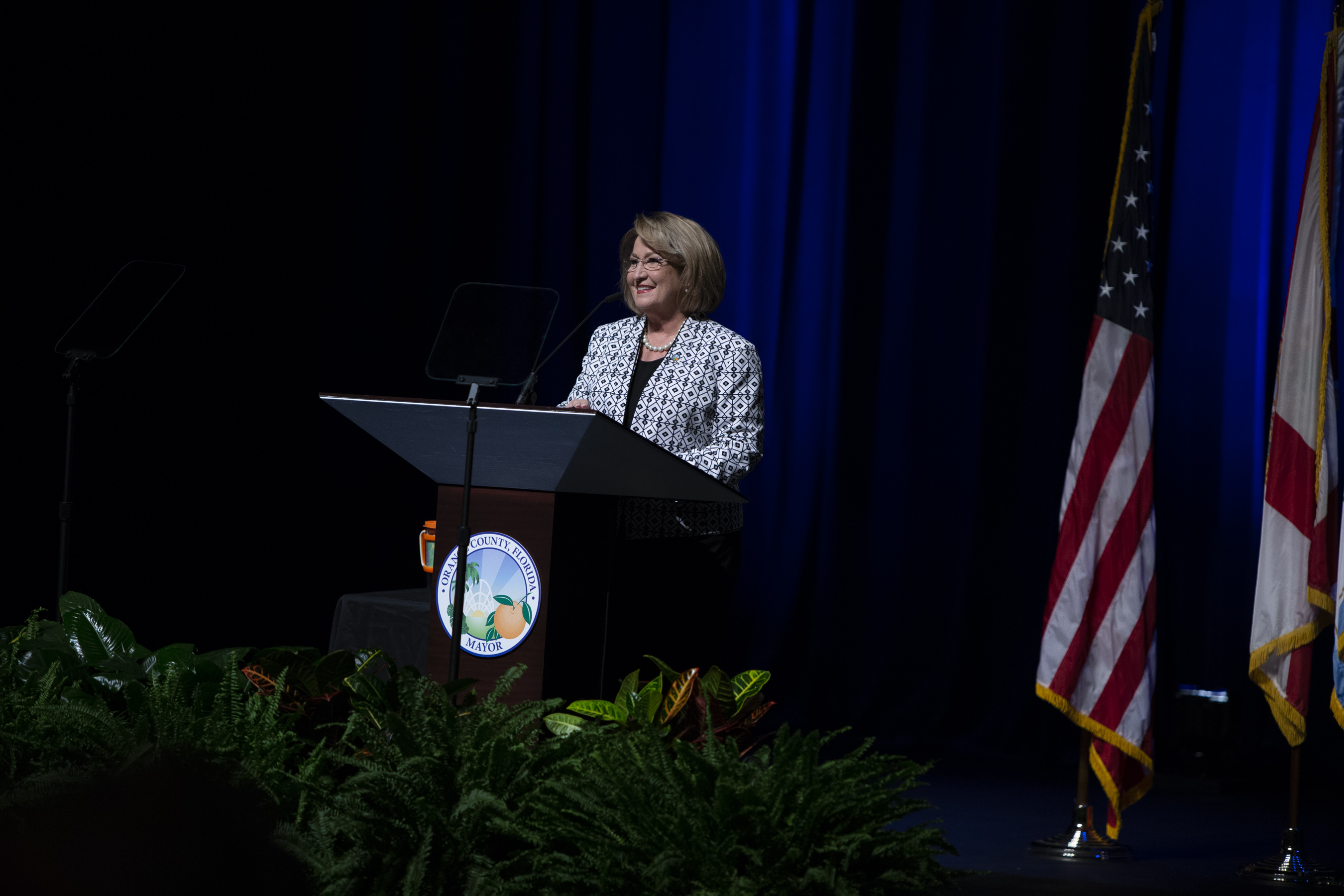 Mayor Jacobs Delivers 2018 State of the County Address at the Dr. Phillips Center for the Performing Arts

Orange County Mayor Teresa Jacobs welcomed hundreds of residents to her eighth and final State of the County address at the Dr. Phillips Center for the Performing Arts on May 18, 2018.

Mayor Jacobs was greeted by a standing ovation and took residents on a journey that highlighted the accomplishments and legacy she leaves as a two-term mayor elected in 2010. She previously served as an Orange County Commissioner from 2000 to 2008.

Since taking office in 2011, Mayor Jacobs’ priority has been to create a sustainable future of ever-growing economic prosperity and opportunity for all, built upon Orange County’s innovation-driven, forward-focused investments. In addition to the key community needs identified in Mayor Jacobs’ $300 million “INVEST in Our Home for Life” initiative, Orange County’s focus has included the creation of a diverse arts, sports and recreation environment; as well as the  preservation of natural resources for families and neighborhoods, efficient roads and transit systems, a broad array of public safety, and children and family resources.

Since January 2011, almost 160,000 jobs have been created in the region, with unemployment falling from 10.7 percent to 3.2 percent in March 2018. Many of those jobs can be attributed to company headquarter relocations and expansion projects with Amazon, ADP, KPMG, Lockheed Martin and VOXX. And with the region hosting 72 million guests in 2017 — the eighth year in a row as the nation’s No. 1 travel destination  —  tourism and hospitality continue to be critical industry sectors in Orange County, generating $70 billion dollars in economic impact and supporting roughly one in three jobs.

As a result, Central Florida was ranked first in the nation for job growth, according to the U.S. Department of Labor. Additionally, Forbes magazine ranked the metro Orlando region No. 1 to invest in a home with an estimated 84,000 building permits issued in Orange County valued at $2.3 billion. Orange County earned the highest AAA credit rating from Moody’s Investors Service, recognizing its fiscal reliability and continued quality-of-life enhancements.

When it comes to quality of life, Orange County has also raised the bar with the acclaimed Dr. Phillips Center for the Performing Arts and Seneff Arts Plaza, the renovated Camping World Stadium and the Amway Center. These community venues have hosted millions of fans, athletes and performers at events such as the NFL ProBowl, The NBA All-Star Game, Orlando City Soccer and Orlando PRIDE games, COPA America Centenario, and WrestleMania.

For additional statistics, to watch a recap and read the 2018 State of the County speech, please visit www.ocfl.net/soc18.

Photo Caption: Orange County Mayor Teresa Jacobs delivered the State of the County address on May 18, 2018 at the Dr. Phillips Center for the Performing Arts.